The president of South Korea, Moon Jae-in, was on hand today at the Okpo shipyard of Daewoo Shipbuilding & Marine Engineering for the naming of the largest containership in the world. 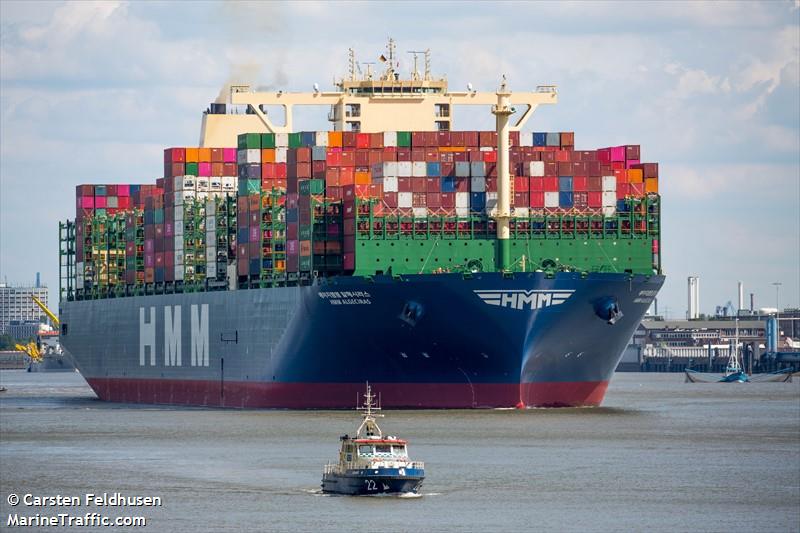 , the first in a series of 12 giant, record-breaking, blue-hulled boxships delivering in the next few months to HMM, South Korea’s flagship carrier and the newest member of THE Alliance, a container grouping also featuring Yang Ming, Hapag-Lloyd and Ocean Network Express.

“For me, it is very meaningful that HMM takes delivery of the most technologically advanced containership in this difficult time. I would like to celebrate it and hope that HMM continues to secure a competitive advantage as a Korean national flagship carrier,” Moon said today, hours after it was revealed his government has put together a $1bn relief fund for the shipping sector, of which $382m will go to HMM.

The 399.9m long ship is 61 m wide and will be deployed on a service linking Asia with northern Europe. It is 208 teu larger than the current largest boxships afloat, the MSC Gulsun and its five sister ships.

As well as HMM and MSC, CMA CGM and Evergreen have thus far opted for these 24-row across giant ships, approaching 24,000 teu in capacity.

Containership size records have repeatedly been broken in recent years, climbing above the 20,000 teu mark for the first time in 2017.