Shipping’s lobbyists come under fire in the latest issue of Splash Extra, which launches today. The monthly subscription title canvassed more than 100 top names to ask whether shipping had been unfairly targeted for its emissions compared to other industries, such as aviation. The response from a very broad swathe of the maritime community has been hugely critical of shipping’s lobbying bodies who a majority feel failed to be as adept and nimble as their aviation counterparts in readying suitably proactive emissions cutting plans. Shipping’s regulators also came in for criticism in the March Focus of Splash Extra.

Launched this January, Splash Extra comes out on the final Wednesday of every month, priced for as little as $100 a year, and serves as a concise roundup of topical issues hitting the shipping industry.

This issue’s lead story comes from California where scientists at Stanford University have successfully created hydrogen fuel using solar power, electrodes and saltwater in a breakthrough that could have enormous ramifications for shipping as the industry seeks ways to decarbonise. One Japan-based shipping expert described the scientific breakthrough as potentially being the biggest change in ship propulsion since the move from sails to engines.

March is the final month where Splash readers can read the full issue for free. Starting next month readers keen to carry on getting Splash Extra will need to subscribe. Subscription details are here. 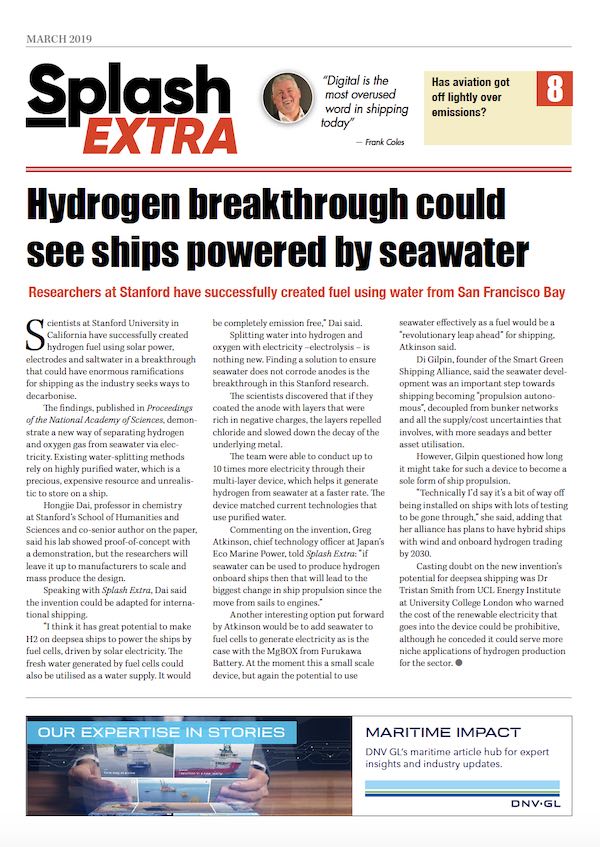