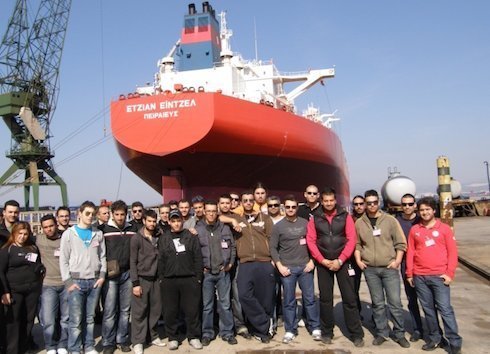 Liverpool: Pouring more cold water over last month’s upbeat report from Bimco and the International Chamber of Shipping (ICS) on seafarer happiness, a new survey suggests shipping still has much to do to make life onboard more bearable.

Crewtoo, a social media platform for seafarers, today launched the Crewtoo Seafarers Happiness Index to monitor important benchmarks of seafarer satisfaction on a regular basis. The inaugural report shows a seafarer satisfaction level of 6.42 on a scale of 1 to 10 about key issues including general happiness, contact with family, shore leave, wage levels, food, fitness and health, training, interaction onboard, workload, and access to welfare facilities. Data for the first report is based on surveys conducted in the first three months of 2015. Subsequent reports will be published approximately every three months based on surveys conducted on an ongoing basis. Crewtoo, founded in 2011, is part of KVH Media Group.

“It is all well and good to talk about seafarers and the realities of life at sea, but until now there has been very little confirmation as to how seafarers actually feel about their jobs,” said Anneley Pickles, head of Crewtoo business development. “For us, it comes down to one fundamental issue: Are seafarers happy? We felt it vital to develop a means of measuring and reporting this issue, which led to the creation of the Crewtoo Seafarers Happiness Index.”

The issues that concerned seafarers the most, as detailed in the first report, included the need for onboard internet access, the risk of stress and fatigue from increasing workloads, and the lack of shore leave.

Crewtoo began surveying its approximately 110,000 members in January, asking them to rate their satisfaction about life at sea using a scale of 1-10 with a score of 10 being the happiest, and 1 being the unhappiest.

“Satisfied, well fed, fit, and engaged seafarers are vital to the present and future of the industry”, said Pickles. “Happy people stick around, happy people work well, they embrace challenges, they look to excel and share with others. In short, happiness matters and it needs to be measured, assessed, and understood. The lessons then need to be applied to ensure that we are looking after seafarers properly and responding to their wants and needs.”

Last month a seafarer survey was published as part of the BIMCO/ICS Manpower Report 2015, which claimed the majority of seafarers’ are content at sea.

This viewpoint from the two shipowning organisations has since been questioned repeatedly. For instance, recent research from Swansea University in the UK shows that seafaring is the career with the second highest suicide rate in the world after coal mining.