Two tankers have been targeted this morning while transiting waters near to Fujairah. Frontline’s fully laden LR 2 Front Altair 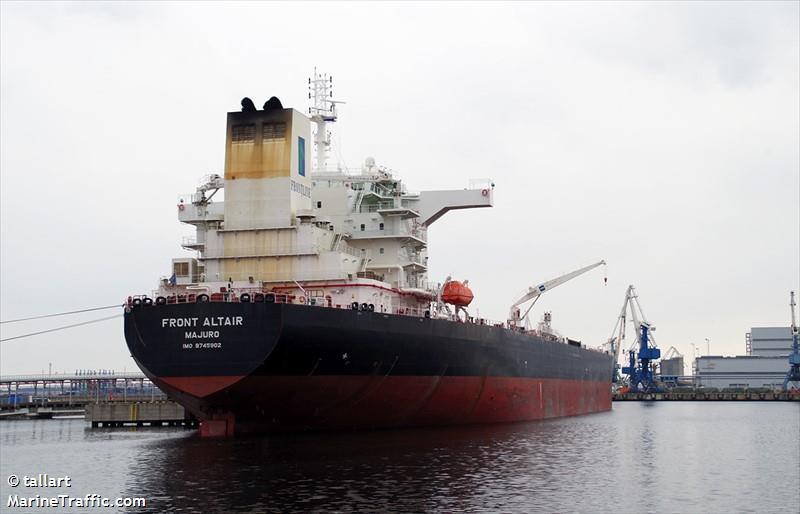 was hit by surface attacks, and an enormous fire ensued forcing the crew to abandon ship. The crew were safely picked up by nearby general cargoship, Hyundai Dubai.

Bernhard Schulte’s chemical tanker Kokuka Courageous was also hit by torpedoes this morning, one month and one day from the moment four other tankers were damaged by limpet mines off Fujairah. The ship disappeared from several ship tracking sites for a period of time today but is now back on the MarineTraffic site, with a ‘Stopped’ status.

“The hull has been breached above the water line on the starboard side,” Bernhard Schulte said in a statement on its website. “All crew are reported safe and only one minor injury reported.”

“ The UK and its partners are currently investigating,” UK Maritime Trade Operations said on its website this morning, warning all vessels in the region to exercise extreme caution. The attacks have also been confirmed today by the US Navy’s Fifth Fleet.

Commenting on today’s attacks, security consultant Lars Bergqvist told Splash: “Although this incident seems to be outside the [High Risk Area], but inside the [Voluntary Reporting Area], it always advisable to follow BMP5 in these waters.” BMP5 is a counter-piracy best practice management guide developed by leading shipping associations. Bergqvist also urged owners to review guidelines for transit of Bab Al Mandab.

Iran's state affiliated news agency releases first picture of ships burning in the Persian Gulf, seemingly taken from the IR Jak Search and Rescue Ship. From this image it looks like the Front Altair which set off from UAE. pic.twitter.com/2jocn8y8jS

Below shows the movement of the Kokuka Courageous today by MarineTraffic.com.