Through its extensive spot fixture database, Poten has a feel for changes in spot crude oil movements from one period to the other. We thought it would be interesting to use this data to rank the busiest dirty (crude and fuel oil) tanker routes into Asia. For this analysis we are looking at reported spot fixture data for the first seven months of 2015 and it is important to keep in mind that the actual cargo movements are most likely significantly higher. It should also be noted that the use of private cargoes and charterer controlled tonnage is more prevalent on certain routes than on others. For example, crude oil movements from the Caribbean (in particular Venezuela) to Asia have been growing rapidly over the last several years as both Chinese and Indian refiners have concluded long-term supply contracts with Venezuelan state oil company PDVSA. However, only a fraction of these voyages are reported in the market, so the number of spot fixtures on these trade routes is not representative of the volume of oil moving. However, despite all these caveats, we feel that this ranking and especially how it develops over time gives a good indication of how crude oil tradeflows are changing worldwide (or not).

The chart shows the top 10 dirty tanker trades into Asia for the period January to July 2015. It will not come as a surprise to anybody that the long-haul crude trade from the Arabian Gulf (AG) to the Far East (which includes China, Japan and South Korea) is by far the biggest. Second on the list is the AG to South Asia (India). In third spot is the first tanker route that does not originate in the Arabian Gulf. As countries the Atlantic Basin (in particular the United States) produce more light sweet crudes, demand for West African grades has declined and producers in Nigeria and Angola have directed more of their exports to the growing Asian market. The West Africa to Far East trade, which is in third spot so far in 2015, was in fourth spot last year. It leapfrogged the AG – SEA (Southeast Asia, including Singapore, Philippines, Thailand, etc.) trade.

The West Africa to South Asia (India) trade is fifth on the list. India, like China gets an increasing share of their crude oil from sources outside the Middle East. The reason is not only related to the quality, availability and price of the West African crudes, but has also a strategic background: countries that rely for a significant portion of their energy supply on imports want to diversify their supply sources, so as to not to become overly dependent on one country or region.

Intra-regional trades, primarily originating from Indonesia, Malaysia and Kozmino in eastern Russia take the sixth, seventh and eighth spot in the ranking. These relatively short-haul trades are followed by two very long-haul trades, i.e. from the Caribbean to Southeast Asia and from the UK Continent to Southeast Asia. While these routes represent less volume than the other trades, they are more important for the tanker market because the long distances generate significant ton-mile demand. 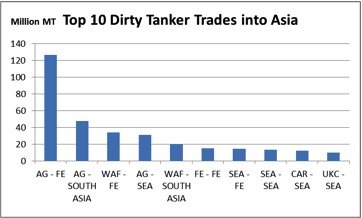 This article first appeared in the most recent issue of Maritime CEO magazine. Readers can access the full magazine for free online by clicking here.