Analysts delight in being right most of the time, but markets often have other ideas, writes Daniel Richards from Maritime Strategies International.

The world economy remains in poor health. In the third quarter of 2019 official statistics show that the pace of real GDP growth in the US and the EU was steady relative to growth in Q2 19, while the pace of GDP growth in China and India decelerated further. The global composite PMI produced by IHS Markit fell to a reading of 50.8 in October, its lowest reading since Q1 16, while Oxford Economics estimates that world GDP growth fell to just below 2.5% yoy in Q3 19, its slowest pace since Q1 13.

Against this underwhelming backdrop MSI has revised its outlook for GDP growth in key regions over the next several years. While the scale and direction of these revisions is not uniform, the outcome is a downward revision to our forecast for world GDP growth in 2019 and 2020, but an upward revision in 2021. We now expect world GDP growth of just over 2.5% in 2019, followed by growth of just under 2.5% in 2020 and growth of 3.0% in 2021.

Our outlook over the next 12 months remains broadly gloomy, then, although our most recent forecast revisions have been accompanied by a shift in our perception of the risk profile facing the world economy. While the risk of a more sustained downturn in 2020 (such as one driven by a US recession) certainly remains in place, on balance we see risks to our macroeconomic forecast as weighted to the upside next year, and see an increasing chance that the pace of world GDP growth will trough in Q4 19 or Q1 20 (rather than mid-2020 under our Base Case assumption).

Three legs to the upside

In order for our forecasts for 2020 to be proven wrong to the upside, three broad factors would need to be in place: first, an upside surprise to US growth, with 2019 proving the trough of the US growth cycle; second, a faster and more comprehensive resolution to the US-China trade conflict than we currently expect (our current Base Case is a broader resolution over the course of 2020); and third, a broad and healthy rebound in the emerging markets that have suffered most this year.

This final point, related to the performance of emerging markets, is critical. The broad strength of the world economy is determined principally by growth in its three ‘centres’ (the US, the EU, and China), but beyond the “base line” pace of expansion determined in these regions there is ample room for divergence and drama. Indeed, it is precisely in this area where forecasting 2019 proved to be a challenge, and why this year has proven underwhelming in macroeconomic terms.

To help illustrate how 2019 has played out and why, as well as to provide track record transparency, the chart presents MSI’s forecasts for 2019 GDP growth in key regions in our Q4 18 report and compares these with our forecasts in this update.

Our Q4 18 forecasts for GDP growth in North America, China, Japan, Korea, and Taiwan, and SE Asia have broadly been validated by the data. In each case we expected a slowdown relative to 2018, but that this would be manageable in extent. We were somewhat wider of the mark with Europe: the slowdown in European GDP growth has been stronger than we initially forecasted, with the extent of the manufacturing malaise in Western Europe (and Germany in particular) coming as the major surprise.

What the chart reveals, however, is that the primary driver of forecast error this year has been serious underperformance in emerging markets. Having initially forecasted growth of around 2.5% in Latin America (which includes Mexico), growth now looks to be flat. Forecasted growth of 1.5% in the Middle East (including Turkey) will in practice likely be negative. GDP growth in Africa has disappointed expectations, while if anything our forecast for 2019 GDP growth in South Asia will likely see further downward revision given ongoing stress in the Indian economy. 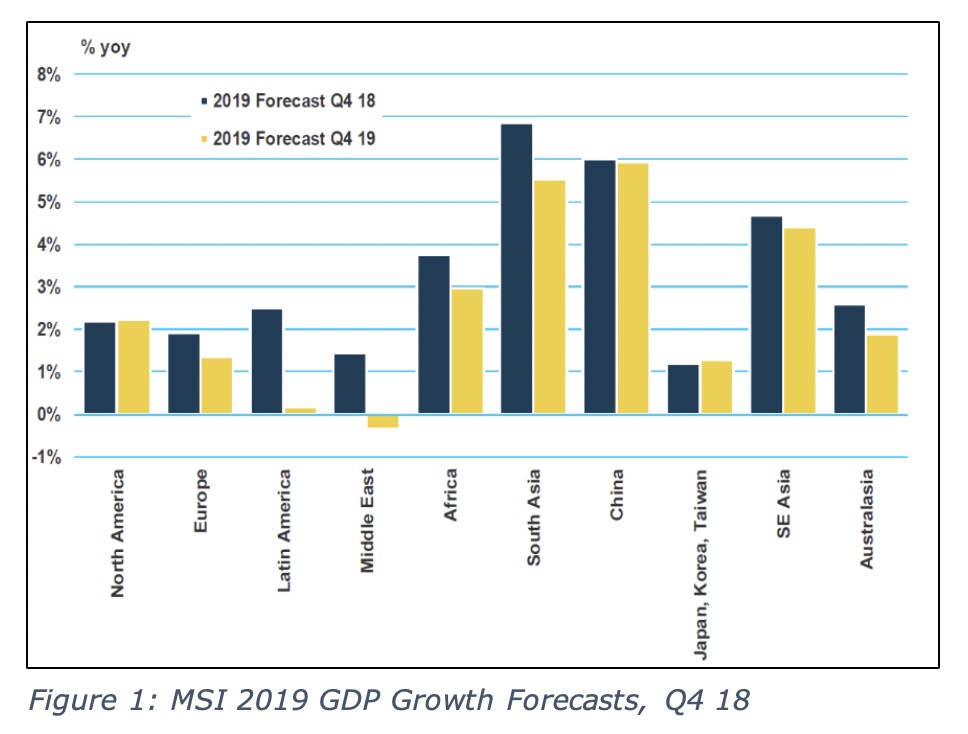