October marked the first month in which the US exported more crude oil by sea than it imported, with exports reaching a new record of 12.95m tonnes, according to data from international shipowning organisation, BIMCO. The huge geopolitical and tanker change looks set to continue, BIMCO’s chief shipping analyst, Peter Sand, has told Splash.

The US Gulf is the driving factor behind the increasing exports, with net exports in the Gulf ports of 41.3m tonnes in the first 10 months of 2019. Houston is the largest exporting port, responsible for 65% of total US seaborne crude oil exports so far this year.

The US is now one of the largest producers of crude oil in the world. Its exports have risen quickly since the US congress lifted a ban on US crude oil exports in December 2018.

The October landmark continued into November, BIMCO’s Sand told Splash today, adding that the trend would carry on into 2020.

When considering total imports, rather than just seaborne, however, the US remains a net importer of crude oil with overland shipments from Canada to the north skewing the balance. 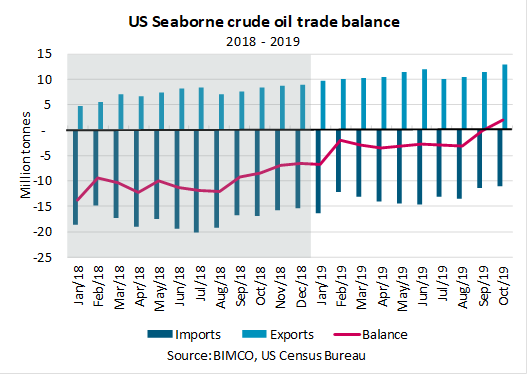