The Venta Maersk departed the port of Vladivostok today at 17.15 hrs local time and is now bound for Europe, becoming the first ever containership to cross the Northern Sea Route through Russian Arctic waters.

The brand new 3,600 teu ship is using ultra-low sulphur fuel for this trial voyage, a spokesperson for Maersk Line told Splash today. The vessel has a flexible fuel changeover arrangement. All fuel tanks have two fuelling and two transfer lines with spool pieces for easy change between fuels.

“By taking the lead in the Arctic, Maersk could lead a vanguard of companies shipping commercial goods that move towards clean and renewable forms of propulsion for shipping worldwide,” the Clean Arctic Alliance said in a statement yesterday. The organisation has been campaigning for a ban on heavy fuel oil in the region for a number of years.

In April 2018, the International Maritime Organization’s Marine Environment Protection Committee agreed to move forward on consideration of an Arctic ban on heavy fuel oil, something that already exists in the Antarctic.

“It is time for international shipping companies to clean up their act by moving to cleaner fuels, while operating in sensitive and vulnerable regions of the world – for the sake of the Arctic, its people, its wildlife and indeed, for the whole planet,” commented the alliance’s lead advisor, Sian Prior.

Maersk is aiming to get its ship, full of frozen fish, through the Bering Strait on or around September 1. The route will include stops in Vladivostok Fish Port, Vostochny Stevedoring Company, Busan, Bremerhaven, Saint-Petersburg Petrolesport.

To date, non-Russian companies to have dominated Arctic transits have been China’s Cosco and Japan’s MOL. For Maersk, this trip will be an exploratory one, looking to pick up scientific data to see whether the route can be more fully utilised as an alternative to the traditional Asia – Europe route via the Suez Canal.

Venta Maersk is the fourth of seven sister vessels and was delivered on July 11, 2018. This will be the ship’s maiden voyage towards northern Europe where it will be trading along with its already delivered sister ships deployed in Seago Line’s network.

Maersk’s new Baltic feeders are among the world’s largest ice-class vessels designed specifically to operate in cold waters, down to -25 degrees C, where ice-class is required to offer year-round operations. 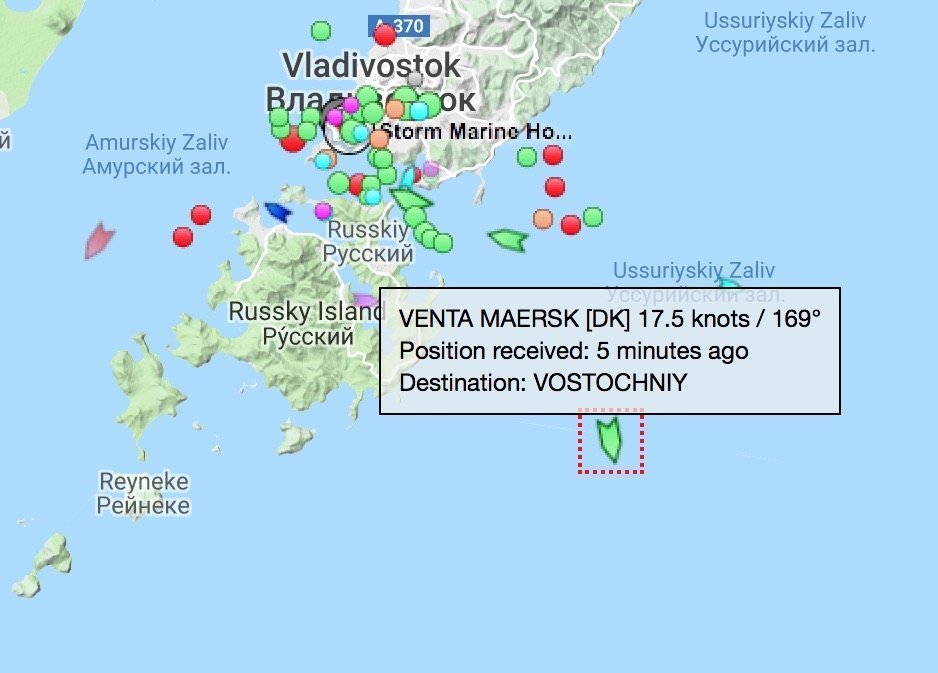