Recent months have seen a step up in interest in the topic of LNG as fuel, with a number of high profile deals being reported or floated for the main cargo sectors. This comes as the advantages of LNG as a fuel are being promoted in some quarters, notably low/zero emissions of SOx and NOx and lower greenhouse gas emissions compared to oil-based fossil fuels.

While gas is clearly not a long-term solution to reducing GHG emissions from shipping, it is argued that it offers a bridge for those companies that need a solution today, when the development of other fuel technologies are in their infancy.

The extent to which LNG as a fuel is creating orders rather than just being an option for orders that would be placed anyway is a moot point. Much of the recent press attention has been focused on major charterers including Shell, Exxon and BHP, who are making a strong commitment to action on climate change through their existing or proposed newbuilding programmes. In the case of BHP in particular, these could be seen as additional orders, as their needs could easily be met by chartering existing tonnage.

To assess the issue MSI has looked at the current fleet and orderbook for LNG-fuelled ships using data from IHSMarkit and other sources.

One of the key distinctions in this arena is between those ships that are ‘LNG Ready’ and those that are actually LNG fuelled. In order to hedge their bets, some owners have opted to build the former, with designs given a ‘Gas Ready’ notification by classification societies.

These ships typically have space allotted for LNG fuel tanks along with additional supporting materials used for low temperatures, engines capable of being converted to dual fuel operation and space allotted for pipe routing and ventilation.

The process is pre-approved by a classification society with three levels available, the first involving design provision for piping and spacing. For example, according to ABS, the class society conducts a rigorous evaluation of the design, structure, arrangement, and equipment to facilitate the retrofitting of an LNG fuel storage and supply system.

This affords shipowners and yards the flexibility to limit initial investment outlay, while planning for the substantial costs of future conversion to dual-fuel. In a rare example, Hapag Lloyd is currently converting a former UASC 15,000 TEU containership Sajir from LNG Ready to LNG fuelled at a cost of $30m, against a current estimated value of the ship of $105m.

Although an LNG-ready vessel is more expensive to build than a standard vessel, the premise is to future proof and provide optionality and flexibility to the owner, which could mitigate, over the life of the vessel, additional upfront costs.

Chart 1 shows the evolution of ordering of LNG-capable vessels over 10,000 GT in the context of total ordering over the last decade. The dotted line shows the share that are either LNG ready or already using LNG, while the sold line shows the share of those believed to be using LNG. Though the latter share is far less impressive, it is still notable that around 10% of orders, in GT terms, are now LNG-fuelled. 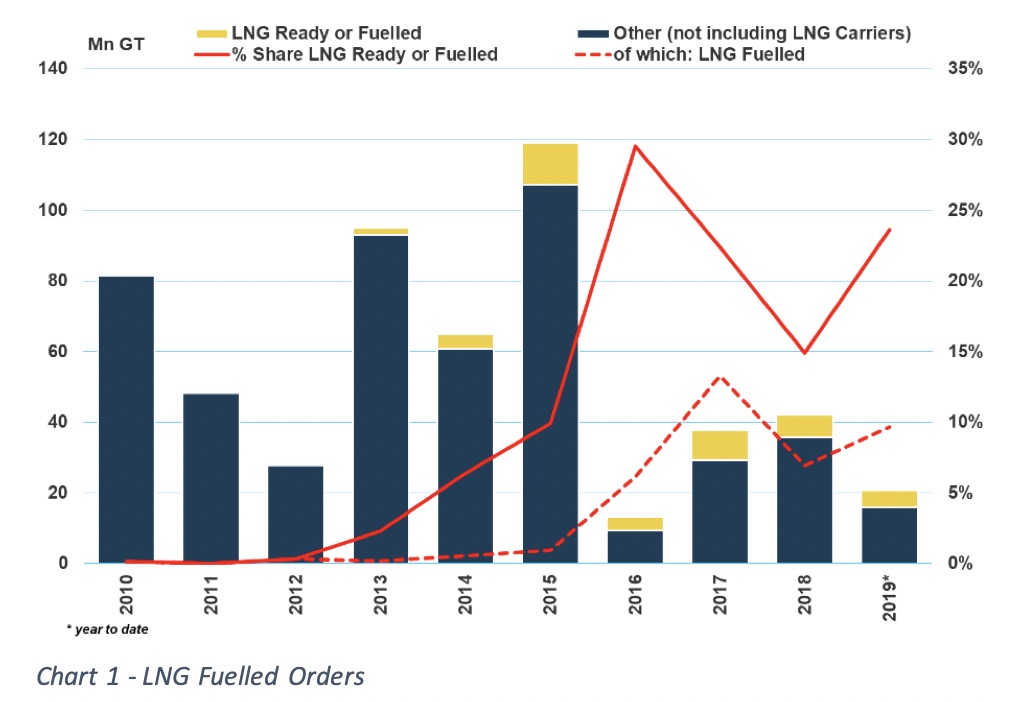 The importance of LNG fuelled vessels varies enormously by ship type; with cruise and containerships the most significant until now. The ‘other’ category has seen a major shift this year with plenty of orders for RoPax tonnage boosting the share. For cruise and containerships, the concentration of the newbuilding market (at least in terms of GT volume of orders) in the hands of a small number of players allows for a high degree of penetration.

Given the recent press speculation on LNG-fuelled newbuildings, it is important to stress that this analysis does not include recently mooted orders by or for charter to BHP, Exxon and Capital Maritime for Capesize bulkers and VLCCs.

Though there is a degree of uncertainty about these contracts (especially that for Capital Maritime), Chart 2 illustrates that they would provide a major boost to the LNG-fuelled orderbook, sustaining deliveries at 10% of the total (excluding LNG carriers) in 2021 and 2022. 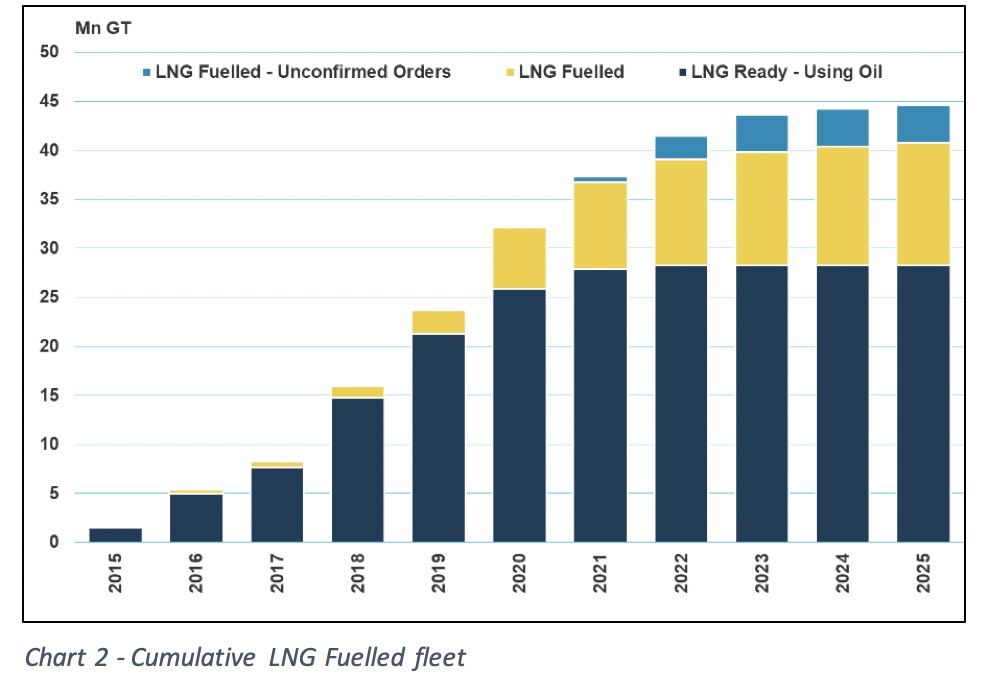 Even so, while significant and involving the deployment of a substantial amount of capital, LNG-fuelled newbuildings will remain a minor component not only of the global fleet but also the newbuilding market going forward.

Estimates prepared by MSI suggest that this fleet would consume in the order of 3.5m tonnes of LNG when fully delivered in 2023, a massive increase when compared with an LNG bunker market that is estimated to be less than 500,000t in 2019. Nevertheless, at around 1% of the global bunker market (generated by 0.8% of the fleet) this would be modest.

To put that in context, MSI first analysed this issue in 2012 in a report published with Lloyds Register. In that study, we assumed that the IMO2020 regulation would be the primary trigger to the adoption of LNG as fuel. Accordingly, at the time we predicted almost no global take up of LNG before 2020 but an acceleration in consumption to a total of 7-9m tonnes per annum by 2025. Based on current take up the total is more likely to be around 5-6m tonnes per annum, assuming further evolution of the LNG-fuelled fleet.

This picture could be transformed by the conversion of the LNG-ready component of the fleet to actual LNG operation. This fleet would dwarf the current LNG-fuelled component and offers a maximum potential LNG fuelled fleet of close to 45m GT by 2025. Under this scenario the size of the LNG bunker market would jump up to 10-11m tonnes per annum, were the necessary berth space available to complete the required conversions.

We estimate that if all LNG ready vessels were fully converted to LNG the total LNG powered fleet would represent just over 3% of the global total and bunker consumption, while the impact on the wider LNG market would be even more modest at 1.8% of total demand.

Beyond the moves by the major charterers noted above it is difficult to see LNG as fuel taking more than a marginal share of the world fleet, given the barriers of cost and technology it requires owners to overcome, as well as the incentives apparently needed to make adoption attractive.

Debate on scrubber economics ‘all but gone now’

Countdown to disaster: why did the Wakashio deviate from its intended course?

Debate on scrubber economics ‘all but gone now’

Countdown to disaster: why did the Wakashio deviate from its intended course?