Any shipping CEO today needs to be able to talk a good game when it comes to digitalisation. Few, however, walk the walk so committedly as Thomas Wilhemsen, the cover star of the latest issue of Maritime CEO magazine, which launches today ahead of the giant SMM exhibition in Hamburg.

There’s a suitably strong German flavour to the third issue of Maritime CEO in 2018. The magazine looks at the plight of German owners and finance as well as noting the changing tides among the nation’s ports. Elsewhere, there is a look at how the trade war might affect the world’s top economies, brilliant analysis of the markets and a feature on where newbuild prices will go in the next 18 months.

On the cover is the 44-year-old boss of one of Norway’s largest maritime firms.

It is Wilhelmsen’s fervent belief that it’s best to be a leader, not a follower, when it comes to tech adoption, going so far to tell a conference organised by DNB bank in January this year that conservative owners will inevitably go out of business.

“We need to be in the forefront and setting the pace,” Wilhelmsen tells Maritime CEO. “Our aim is to shape the maritime industry.”

As well as its car carrying fleet, the Wilhelmsen brand is involved in port agency, shipmanagement, insurance and much more. Across the multiple companies and its 21,100 employees what the group CEO has tried to instill is an ambition to try out new things.

“If we are able to live up to our vision to shape the industry we need to be agile enough, curious enough to try new ways of working,” Wilhelmsen says, stressing: “We are not a tech company. We are not heavily vested towards R&D. We do not have the competence to create the technologies as such but we want to get the mindset for our peole to try new technologies.”

While not being a tech company per se, this has not stopped Wilhelmsen from buying into tech firms and ploughing ahead with revolutionary maritime pilot projects.

Witness, for instance, its tie-up with mighty Airbus to develop drones for delivering parts and essentials to ships. The company believes delivery by drone has the potential to lower shore-to-ship delivery costs by up to 90%, as well as removing the safety risks inherent with delivery via launch boat.

Others might follow Wilhelmsen’s lead in drones as well as other developments, but according to the group CEO clients appreciate how forward thinking the Norwegian company is.

“Being the first to do it is good,” Wilhelmsen says. “Others might copy it, they are welcome to do so, but that puts us in different situation with our customers who see us as proactive.”

Wilhemsen has been trialling smart ropes with sensors as well as many other novel initiatives such as 3D printing in port.

Arguably the most exciting development announced so far is Massterly, an autonomous shipping joint venture with fellow Norwegian group Kongsberg. Announced this April, Massterly will offer a complete value chain for autonomous ships from design and development, to control systems, logistics services and vessel operations.

Kongsberg, along with fertilizer company Yara International, has recently tapped shipbuilder Vard to build the world’s first first fully-electric autonomous container vessel. The revolutionary 120 teu ship is due for delivery next year.

Norway has rightly earned a reputation as a world leader when it comes to maritime innovation in recent years, something Wilhelmsen reckons will continue far into the future.

Concluding, Wilhelmsen has some useful advice to his peers in shipping whom, he reckons, should take a look at how the finance sector has changed in recent years. “Look at banking,” he says, and just how efficient they have become for their customers. It will be the same for shipping.”

Splash readers can download the full magazine for free (including a useful guide to German wines for those bound for Hamburg!) by clicking here. 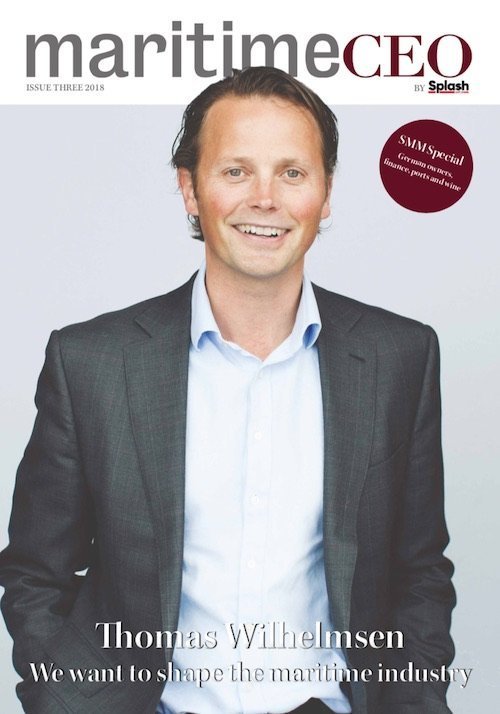