It was meant to be one of the most eagerly anticipated vessel launches of the year, but ship spotters might not have to wait too long to catch a glimpse of the Yara Birkeland 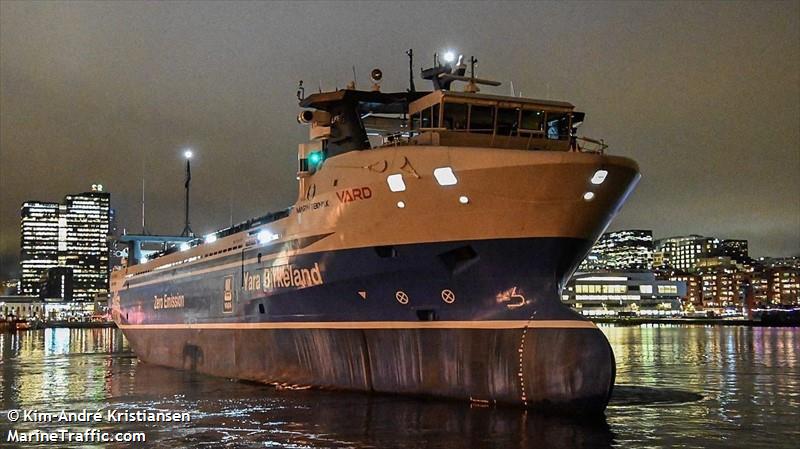 in action with a late 2021 launch now on the cards for the world’s first battery-powered autonomous vessel.

Norwegian fertiliser firm Yara International, which ordered the pioneering 120 teu vessel in 2017, paused development of the ship in May this year, citing the pandemic at the time. However, it appears the real reason for the project being put on hold were the complexities of getting autonomous landside operations in place.

We underestimated the complexity

In an interview this week with Norwegian engineering magazine Teknisk Ukeblad, Yara boss Svein Tore Holsether hinted the 80 m long vessel, developed in association with Kongsberg Maritime, could start sailing next year. The hull was completed at the Vard Braila Shipyard in Romania, and towed to Vard Brattvaag Shipyard in Norway for outfitting, which will be completed this month.

Getting the landside operations in place had proven trickier than anticipated from order receipts, production, packing, transport to the ship, and loading and unloading containers.

“We underestimated the complexity,” conceded Holsether.

“We have a fully finished ship that is designed as autonomous where we can really start testing under realistic conditions,” Ketil Olaf Paulsen, director of technology and development at Kongsberg Maritime, told Teknisk Ukeblad.

Participants in the project are now seeking funding to carry out full-scale testing of the ship.

Another Norwegian firm, ASKO, a grocery distributor, is trying its hand at revolutionising the world of shipping.

In September this year, ASKO signed with Norway’s Kongsberg Maritime and Massterly – a Kongsberg Wilhelmsen joint venture – to equip two new vessels with autonomous technology, and to manage their operations at sea.

The vessels, which are due to be delivered early in 2022, have been designed by Norwegian vessel designer Naval Dynamics and will be constructed at the state-owned Cochin Shipyard in India.

Bunkering gets its first NFT

Bunkering gets its first NFT