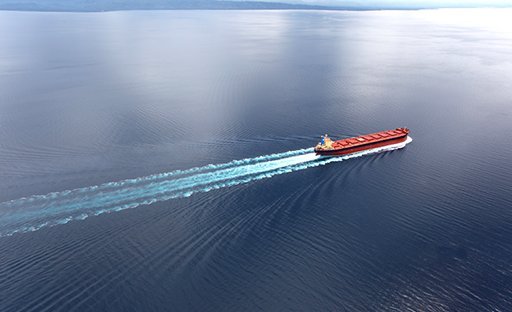 The team at BunkerEx provide Splash readers with a case study on the importance of always recalculating all bunker options.

Earlier, we wrote how shipowners and operators can lose millions by not considering all their bunker options. Here we show that even if all options are considered, high price volatility between bunker ports means the choice needs to be continuously scrutinised to avoid large P&L losses.

Bunker prices fluctuate with the oil markets but even after stripping out the effects of crude, prices between ports are still extremely volatile. As a result, the cheapest bunker port on the same voyage can change every 3 days, meaning shipowners can suffer big P&L losses by not constantly reevaluating all options right until they have to fix.

As examined in the case study below, recalculating all bunker options is vital but takes a huge amount of time, and this is precisely why software solutions exist that run the full calculation in seconds.

This high volatility between ports is clear by looking at the spreads between the major bunker hubs (e.g. Singapore, Rotterdam) and other ports in their regions: 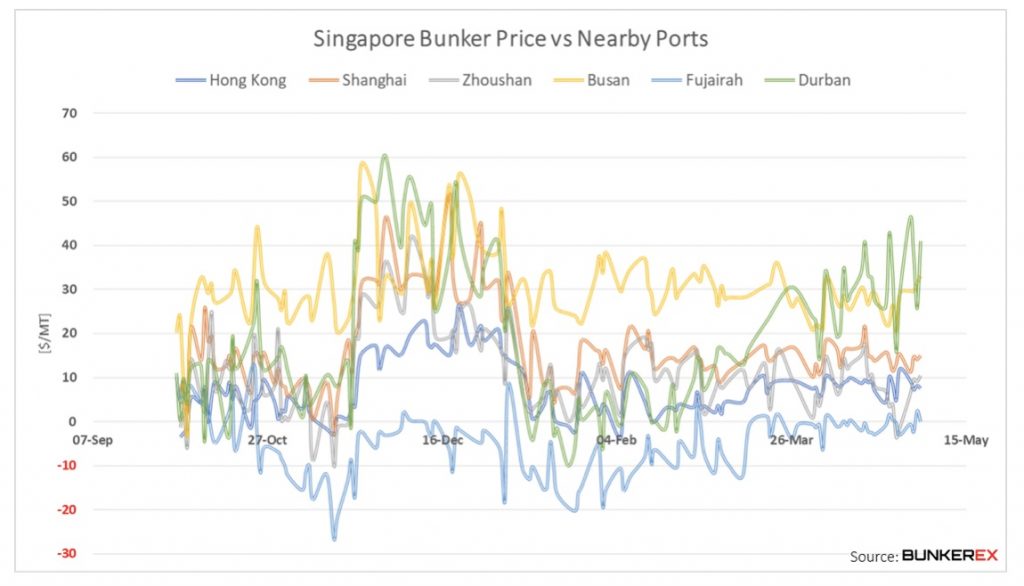 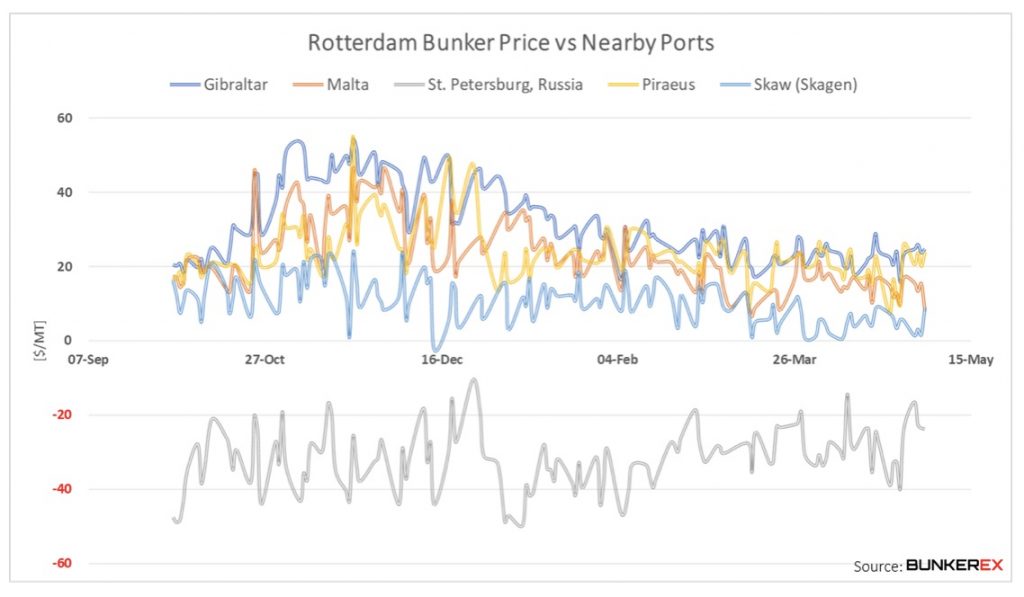 This is more clearly illustrated by charting the volatility of the spread itself between the two ports (not the outright price).

In practice a shipowner is not only exposed to the daily volatility in the spread but more likely the volatility over the sailing time between the two ports (this is not exact as it depends on the specific voyage but we have used it as an approximation). 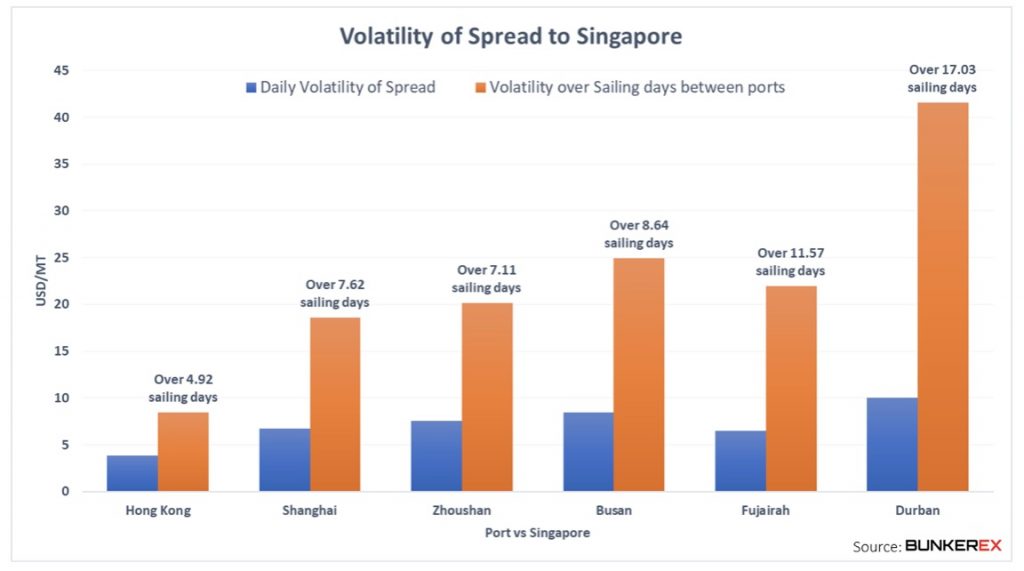 In an industry where the earliest one can typically fix is 10-15 days before ETA across all ports and no hedging instruments exist for regional port differentials, commercial operators carry large price exposure that should be optimised.

Put simply, in the time it takes to sail between one bunker port to the next, the price spread between the ports often moves by up to $20/MT.

However in the bunker market, owners and operators regularly request bunker quotes from multiple brokers/traders/suppliers having assessed only one port.

A vessel is sailing to the Mediterranean to discharge a cargo. With an open ship coming up, the chartering manager assesses different voyage options from ship brokers, one of which is a cargo loading EAST MED and discharging USGC.

After accounting for their operational safety margin, the noon report shows the vessel does not have enough bunkers on board to reach USGC.

In their voyage estimate, the chartering manager calculates a stop for bunkers in the Mediterranean by collecting prices and fuel availabilities at major ports en route: Gibraltar/Algeciras, Ceuta, Malta, Piraeus, Kali Limenes and Augusta.

After considering the prices, deviation to each one, calling costs (for bunkers only), their laycan, weather, added consumption and time opportunity cost for delivery and deviating, they determine Piraeus as the best option as it is pricing lower vs nearby ports: 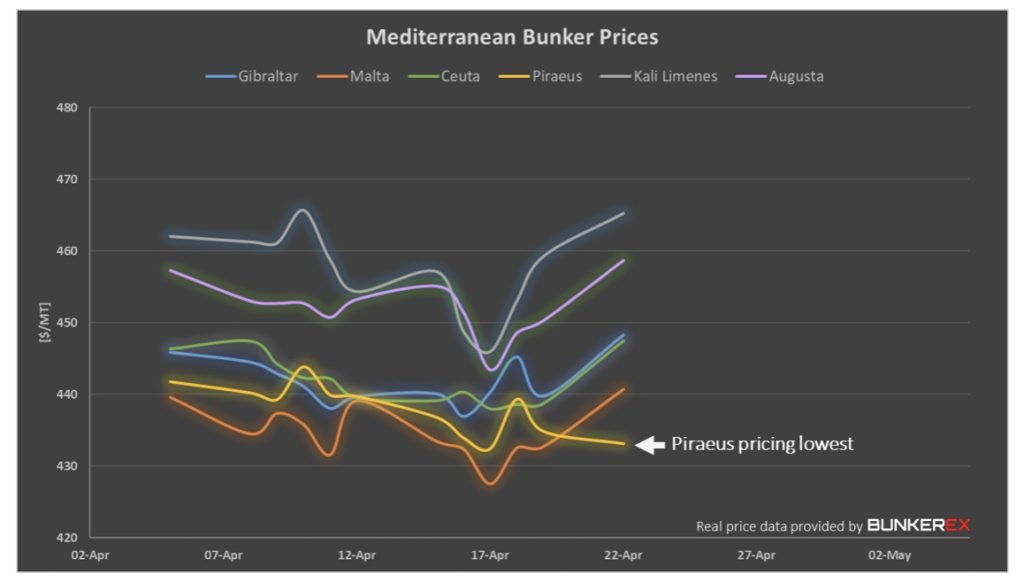 After three days subs are lifted and the ship is fixed, meaning they can now place a firm order for the bunkers in Piraeus. To be safe, the operator reruns the check and once again collects fresh prices, availabilities, congestion and weather reports for all the bunker options.

Piraeus prices have now risen relative to the nearby ports. Although Malta is the cheapest, the small deviation and risk of weather delay makes Gibraltar the new best option: 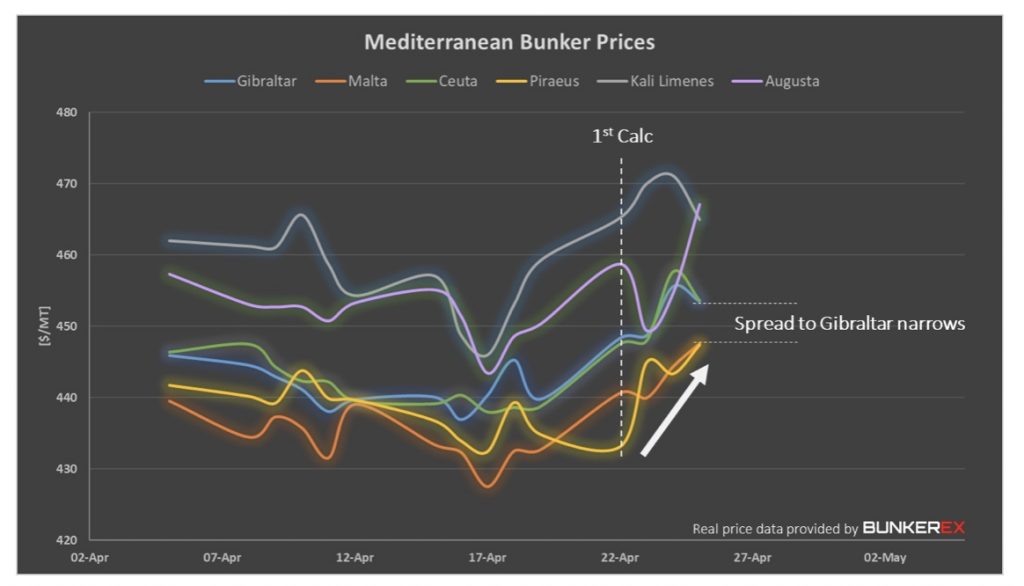 With the vessel now just eight days from Gibraltar, they are ready to place the firm bunker order but as a final check, the bunker ports are reevaluated. Once again fresh prices are collected and after only a few days, Malta has dropped significantly relative to the other ports. Availability and weather forecasts also look good, so after running the full calculation one more time, the bunkers are booked in Malta for a meaningful saving of over $10/MT on the voyage P&L option 1 (Piraeus) and option 2 (Gibraltar). 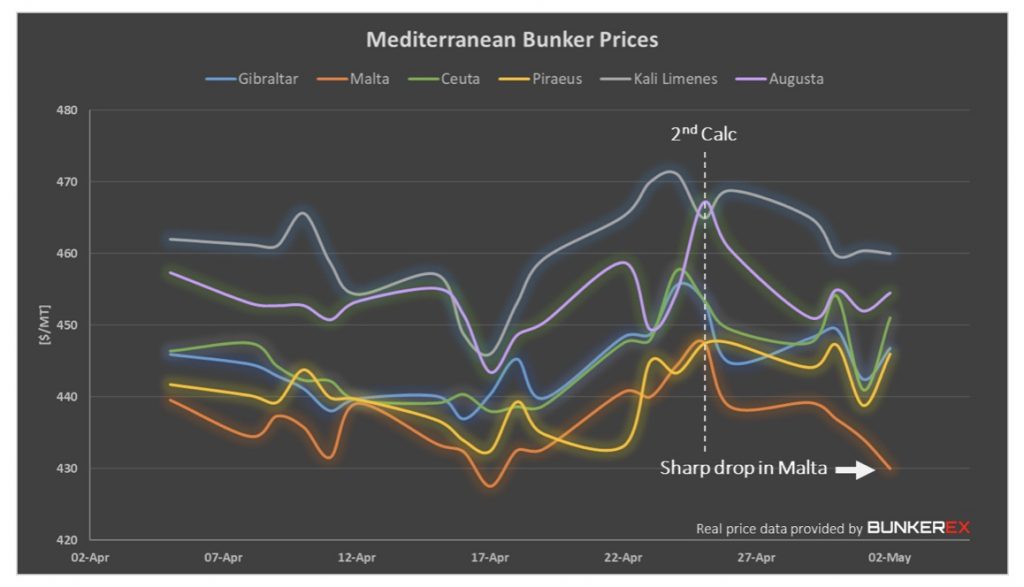 This case study uses real data to illustrate the importance of continuously reevaluating the choice of bunker port.