Yesterday’s coverage of a Sea-Intelligence report looking at Maersk’s dominance when it comes to social media has engendered enormous feedback and discussion among Splash readers.

The Copenhagen-based container shipping analysts at Sea-Intelligence had crunched the numbers of the top 15 carriers, covering their presence on three social media platforms – Twitter, Facebook and LinkedIn – with Maersk far out in the lead in terms of followers.

With more than 3m Facebook likes, Maersk still dominates carrier social media, with 90% of all top 15 carrier Facebook fans, according to Sea-Intelligence. On LinkedIn, Maersk is twice the size of CMA CGM, and three times as big as the second placed French carrier on Twitter.

However, many social media strategists were quick to suggest that in terms of actual social media engagement the figures were misleading, and that Maersk had lost ground in recent years.

Jonathan Wichmann, who helmed Maersk’s social media activities from 2011 to 2013, and now runs his own creative agency, took issue with the Sea-Intelligence report, suggesting that successful social media strategies today were not about the number of followers, but the level of engagement, something he believes Maersk has let slip in recent years.

“Since around 2014-15 when social media companies – Facebook in particular – throttled organic reach, social media has no longer been about number of fans and followers as much as about how good you are at engaging your followers,” Wichmann wrote on LinkedIn yesterday, in response to the Splash article.

“If you cannot engage your followers, then you are punished by social media companies’ algorithms – and you don’t reach anyone. Then you can have 3m followers and it’s all worthless,” Wichmann suggested.

Wichmann argued that the metric that matters today is the average organic engagement rate, namely the number of organic likes, shares and comments a post gets.

A month ago, Wichmann, who has been doing some work for MSC this year, carried out a study as to which of the top eight liners were doing the best job on social media. Unlike the Sea-Intelligence report, Maersk places just fifth on Wichmann’s chart (see below), with 2M partner MSC on top with engagement figures that are quadruple those of its Danish rival.

Graeme Somerville-Ryan, a columnist for Splash, who has focused on social media performance in shipping a great deal in the past, pointed out that Maersk’s current social media engagement rate of 0.11% was bettered by a number of other liners.

“Measuring followers is irrelevant in targeted B2B marketing,” Somerville-Ryan said. “There are plenty of people doing better than Maersk. If your measure of success is number of followers, basically you are saying it’s impossible for smaller companies to outperform larger ones in marketing and comms, and this is clearly not the case.”

“It’s a little short-sighted to simply see social media following just in terms of business size and B2B sales,” argued Alisdair Pettigrew, the head of BLUE Communiucations, in conversation with Splash yesterday. “It’s far more relevant that it is viewed and used as a tool to communicate with employees, potential employees, customers and other key stakeholders – as an increasingly important conduit – and to realise the value of building a reputation that aligns with an organisation’s brand values”.

Russ Green from Hong Kong’s RTG Communications took issue with how many shipping lines were failing to come up with coherent messages online. “Social media is an important channel as part a cohesive marketing and PR plan,” Green told Splash. “However, many shipping companies are randomly posting on social media, without any thought of the overall message they are sending to the industry.”

The Sea-Intelligence also made repeated references to how poorly represented Asian carriers were on the three dominant American platforms.

Taking issue with this part of the report, Edward Ion from Singapore’s Helix Media told Splash: “It tends to be more of a staff/crew engagement thing rather than for brand building or external comms in this part of the world.” He also pointed out that the report did not include data covering Asia-centric channels such as Weibo or WeChat.

What many in public relations agreed upon yesterday was that Maersk had led the way for other carriers in terms changing the channels and nature of customer engagement.

“I think what Maersk understood early was to move beyond service and product and understand how to engage their customers and stakeholders directly,” commented Neville Smith from UK-based Mariner Communications. “That took some vision and it underlines what many companies find hard to get to grips with: understand the process, manage your risks and there can be lots of upside for your brand.”

Going beyond client engagement, the other bonus that social media could bring to the industry is in getting its message to the general public, suggested Andy Ford, operations director at Wake Media.

“As shipping tackles increasingly public challenges – from decarbonisation to attracting young talent – social media offers a great but under-utilised opportunity to reach the general public. The companies that do this well do a service to themselves and to shipping as a whole,” Ford said. 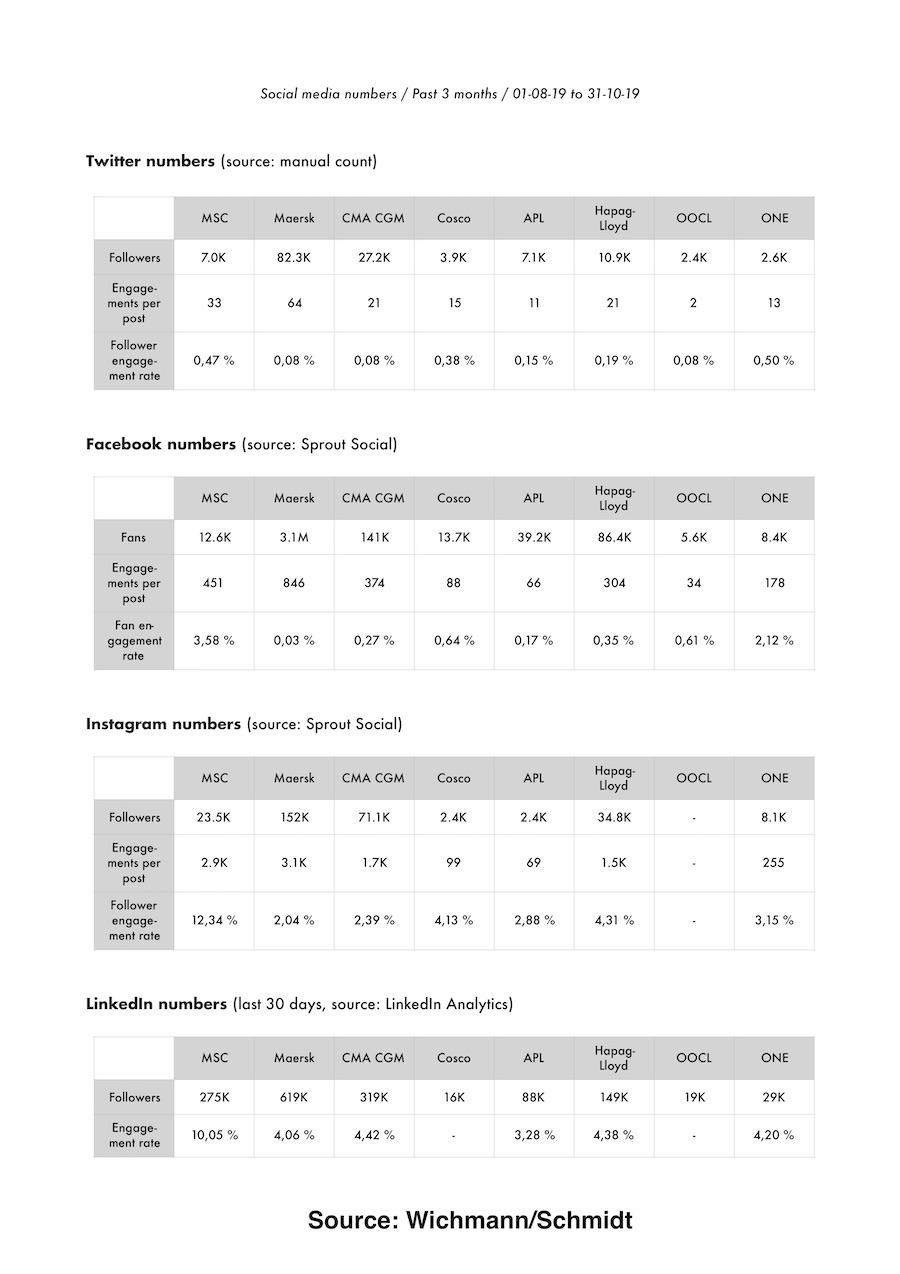 Pacific Basin tipped to have taken another ultramax