The debt situation at South Korea’s two largest shipping lines is causing serious concern in local circles with authorities stating that the pair will not be bailed out by the state. Talk of merger between Hyundai Merchant Marine and Hanjin Shipping, which first surfaced last year, has now reemerged.

Both lines have been selling assets in order to raise liquidity – HMM most recently putting its dry bulk division back in the shop window.

Both lines face significant debt repayments this year. HMM must repay debt of KRW120bn ($100.08m) and KRW240bn, which were raised from the public, at the end of April and July. Hanjin Shipping, meanwhile, will also need to repay debt of KRW600bn this year.

The pair are saddled with enormous debts – Hanjin’s debt ratio standing at 687% and HMM’s 980%.

With Seoul unlikely to step in to help, merger talk is back, something that was denied repeatedly last year by both lines and even the government.

An official from the Financial Supervisory Service told local media: “Since further financial supports to the companies are like filling a bottomless vessel, we cannot do that anymore. It is more important for an individual company to make every effort to implement the targeted plan first.”

Combining the pair would catapult them up to fourth spot in the global liner trades, according to Alphaliner, breaking the 1m slot barrier and positioning them as Asia’s largest containerline, larger than Taiwan’s Evergreen. The pairing would have a very strong position on the transpacific in particular and could conceivably help drive Busan, Korea’s main port, to grow quicker.

Statistics provided exclusively to Splash in November by VesselsValue.com (see infographic below) show the combined entity would rank as the 19th largest shipping line in the world with a combined fleet worth more than $4bn. 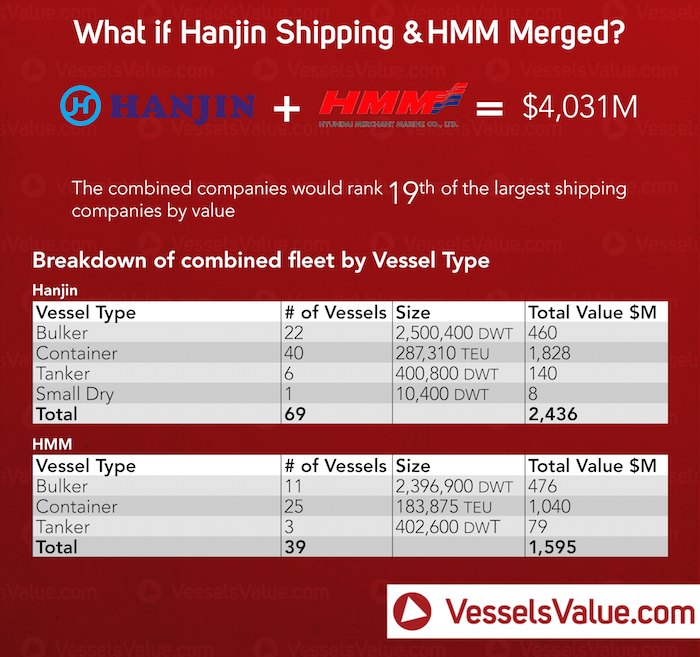