The editor gave me a free rein this issue. “The choice of topic is totally up to you,” he said. He might regret that – welcome to the doom and gloom column.

The following does not pertain to shipping per se, but looks at the big picture; issues that are seriously undermining the stability of the global economy.

This has been the most dramatic March I have experienced in my lifetime. The Brexit discussions, critical US – China trade talks, Venezuela in total chaos, a nuclear standoff in Kashmir and Kim Jong-un readying some more nukes too; just to name a few matters keeping me up at night.

Uncertainty will reduce growth for the global economy and by extension for most shipping sectors. I do not see a recession, just a protracted period of slower growth.

A tally of readers’ votes carried on the back page of Maritime CEO magazine, published yesterday, shows you’re more worried about growing protectionism around the world than the slowing Chinese economy. Let me tell you I am genuinely concerned about the weakening Chinese economy – and you should be too. I was reading recently there are 65m empty apartments across China. 65,000,000 unsold properties! You wonder how banks can survive such a catastrophe. In a way you could argue the US actually now holds the whip hand in the ongoing trade talks. Still, for my money, I’d also warn as I see the US economy getting overheated with the lowest unemployment in 100 years according to sources close to the president.

The problem for the world economy and by extension shipping is that there is no country that can replicate what China did since the dawn of the millennium in terms of growth. Hopes that India might replicate such a stunning economic transformation are misplaced.

Back in Europe, meanwhile, once Brussels has finally resolved its Brexit discussions, EU-US trade talks are fast approaching and these two have been at each other’s throats in recent months. And Europe might now have to pay for the bad way they have treated US imports for many years.

All of which leads me to agree with comments made by Søren Skou, the CEO of AP Moller-Maersk, earlier this month, suggesting that boxship sizes have plateaued finally.

We have surely reached a limit on boxship sizes as there is now very limited benefit of adding another 1,000 teu in size while growth for liners going forward will increasingly come from local and regional trades rather than the main east-west trades. And then there’s the threat posed by 3D printing, but maybe that’s a whole other column for another time.

Like the liner trades, the current woes facing the global economy would suggest dry bulk’s travails could be extended for quite some time.

Indeed, the only areas set to profit from all that is going on are in energy transport, I would argue.

As Angeliki Frangou famously said: “What’s bad for the world is good for the tanker market.”

Changing oil patterns are going to work out just great for tankers with growing ton-miles, while I also can see a very bright future for those involved in clean energy shipping such as LNG and hydrogen – a bright spot to end on to keep the editor happy! 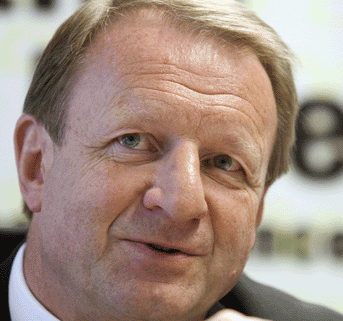 Dagfinn Lunde, previously head of DnB New York (90-95), Head of INTERTANKO (95-00), and on the board of DVB responsible for the shipping and offshore division from 2000 until end of 2013. He is now a board member of Advantage Tankers, Dynamic Drilling and Maxi Shipping and co-founder of DagMar Navigation Ltd.

How prepared is shipping for a cyber attack, really?

How prepared is shipping for a cyber attack, really?