Two years after a humiliating bankruptcy that cost investors $250m, Bertram Rickmers is back, with the first of 10 feeder boxships ordered in China making its maiden voyage across the transpacific. 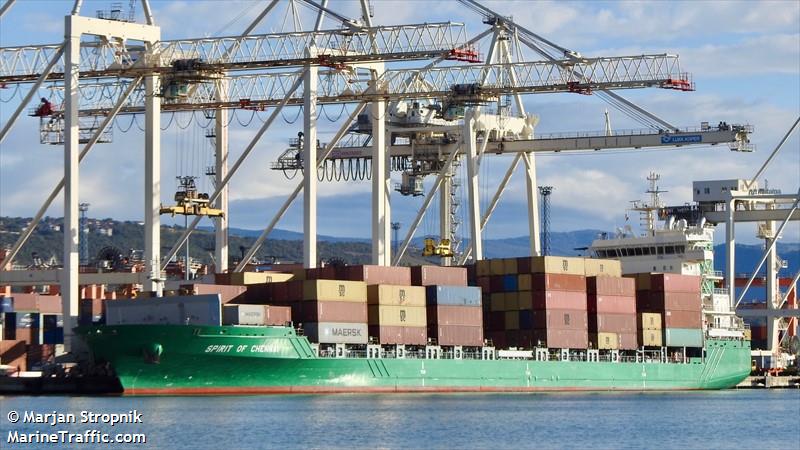 (pictured) left Fuzhou on Sunday as an extra loader from China to the US East Coast. The ship is the first in 10 that Rickmers has on order at Fujian Mawei Shipyard to be operated by 2020seaways, a Bertram Rickmers vehicle controlled by his new Hamburg company, Asian Spirit Steamship Company.

The ship will shortly be joined by the Spirit of Kolkata, both of which have been taken on charter for two years by MSC with an option to extend by a year. The ships are hybrid scrubber fitted, and have commanded a very healthy $12,500 a day for the first two years, rising to $14,000 if they go for a third year. The scrubber premium Rickmers has been able to extract from MSC is approximately 45% higher than for equivalent tonnage without a scrubber.

To date, owners have focused on adding scrubbers to large boxships, in excess of 12,000 teu. Rickmers’s 2020seaways play aims to find a niche for carriers seeking environmental solutions for feeder ships come the start of the global sulphur cap. MSC is expected to deploy the ships on the Caribbean trades.

The gearless ships – dubbed ECO16 – are designed by ABH of Germany and have a shallow scantling draft of 7.70 m, which analysts from Alphaliner observed in their latest weekly report make them suitable for serving Kolkata hence the alternative name, Benglalmax, for the design.

The Spirit of Chennai sporting the famous Rickmers green and red livery is the first boxship to be delivered from Fujian Mawei’s new yard on Zulu Island after the old site near downtown Fuzhou closed.

Rickmers has made clear in interviews over the past six months of his intention to build the Asian Spirit Steamship fleet up to around 40 feeder boxships.

Meanwhile, Rickmers’s brother, returned to shipping this April at the much slimmed down ER Capital Group. Erck Rickmers sold his shipmanagement and shipbroking businesses to compatriot Zeaborn Group last year.

Speaking at the Sea Asia conference in April, days after assuming the CEO role at ER Capital, Rickmers said that, unlike his brother, shipping was increasingly taking a back seat in his investment spread.