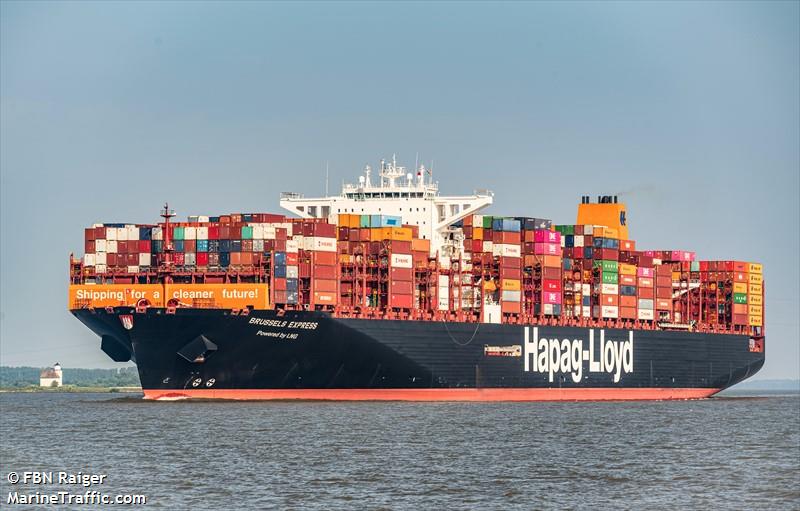 , formerly Sajir, is making its way down the southeastern Chinese coast today, en route to Yantian and then Europe, having just been filtered back into THE Alliance’s Asia-Europe network after a seven-month operation to allow the vessel to become dual fuel. Retrofit works were contracted with Hudong Zhonghua Shipbuilding and carried out at the CSSC Group’s Huarun Dadong Dockyard Company (HRDD) in China.

The vessel’s new 6,500 cu m LNG Mark III tank was designed by the French firm GTT and the 1,300 ton structure was hoisted into the ship’s hull in late September (pictured above). MAN Energy Solutions carried out the conversion of the HFO-burning MAN B&W 9S90ME-C engine to a dual -fuel MAN B&W ME-GI type.

The bulky LNG tank means the ship, which Hapag-Lloyd took over when it merged with UASC, has now lost some 390 teu in capacity, according to Alphaliner.

Back in September, Hapag-Lloyd estimated the cost of the engineering feat would be $35m.

“Excessive cost, container intake loss, and an extended vessel downtime, all line-up against LNG conversions as an ‘easy fix’ to improve greenhouse gas emissions of existing tonnage,” Alphaliner pointed out in its latest weekly report.

Hapag-Lloyd has thus far been the only carrier to convert a big mainline container ship to LNG.

“Until conversion prices come down and until tonnage demand has reduced sufficiently to ease the pains of having a large mainline ship out-of-service for several months, new conversion projects seem rather unlikely,” Alphaliner suggested.

Other pioneering non-LNG conversion projects have been announced recently, most notably Eastern Pacific’s decision last month to retrofit some of its existing tankers so they can run off methanol.