In January I wrote for Splash on Pacific Basin valuation approaches. Bulk has been in a rebounding form from low-lows pattern for some time. The key is always 1) the average base at higher levels, and 2) a gradual break through to new levels. For container vessel owners, the rebounds are a little more recent – but recently it’s looked like we are close to breaking out to new levels.

I’ll go back to some industry issues at the end in passing, but mainly I want to focus on how to approach the rebound in container vessel owner values.

I prefer to look at Costamare (CMRE) than Seaspan (SSW) because CMRE is a cleaner vehicle at this stage, regardless of recent SSW funding and management changes*. The issue is more about asset profiles and disclosure, leading to our ability to read the numbers concisely.

The most recent May ‘18 result presentations for the two companies underscore CMRE’s higher disclosure of a few additional key items. Both companies’ share prices have rebounded about 30% from average price levels last year and about 50% from their lows.

I particularly like CMRE’s earnings presentation for its page four list of new charter contracts which give us a clear understanding of higher earnings coming through from higher level charter renewals in 2018.

It’s pretty easy to count ships on that slide as well as cross-reference with the fleet list to see what’s renewing later in 2018 and early 2019.

Also heartening is the decline in financial leverage, which we can see on page eight of the results presentation. With an average fleet maturity of under three years, it’s easy to see that CMRE has upside in renewals if the market shift up holds. And SSW, potentially, has a more mixed or even an opposite threat coming from part of its fleet with longer charters coming off charters dating back to periods when charter rates were still higher. The asset rental reversions are running somewhat opposite directions for these two companies.

After a rapid glance at the CMRE fleet profile, we can see there are some 40 ships renewing into this firmer charter market for ships in 2018-1Q19, out of about 73. Then we can look at the quantum on charter increases from CMRE’s presentation, and the look at recent continued charter improvements to see CMRE is in a fairly positive upcycle on higher charter renewals.

What we need to focus on are the twin rebounds in charters and secondhand values, which we can see in the following chart on 3,500 teu ships, which I use to capture a longer time frame than bigger ships with less data. If I have to use one chart, I pick one (source: Clarkson) that rebases values to 2001 and shows data points representing a percent of the January 2001 price. 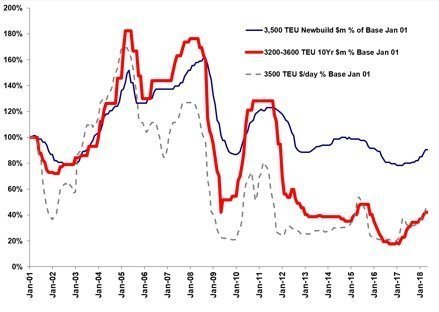 This chart speaks volumes, though patterns do vary somewhat from vessel size to vessel size. But, in general, what we see is 1) newbuilds never really fell all that much, as there is a certain floor construction cost to consider as well; 2) secondhand ships (10-year-olds, which are more volatile than five-year-olds) collapsed to lower lows in 2016-17 compared to 2009-10, while charters showed more of a double bottom pattern; 3) periods of secondhands trading close and even above newbuild performances are in the distant past, to be sure.

There are additional points to make. But, in general, we see the current rebounds from the decimation of 2016 as a trend, which needs to hold (and which appears to have momentum to do so, based on current information). And if they do break out from here, the next level we climb to will be positive for asset owners.

Longer term, the risks we need to focus on for containerships will be 1) the capex for installation of scrubbers at up to $6m per ship (or higher fuel costs, etc.), 2) the risk of economic obsolescence on older ships where scrubbers can’t be justified, and 3) another rise in scrapping. This rise in obsolescence may lead to a ship price bifurcation situation we saw with single hull and double hull tankers some 15 years ago.

Ultimately, over the coming years, investors will need to look at fleet profile analysis for all ship owners and operators. Perhaps, by 2020, some companies will have volunteered a best-case analysis on obsolescence.

* I mentioned in posts recently that new SSW management specific criticism of Graham Porter was unwarranted given the Washington family quite possibly would not of had much of a company to own shares in in the first place, had it not been for a long term strategy pre- and post- ’08 financial crisis driven by Graham. 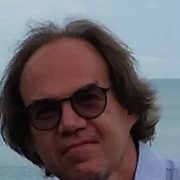