Dubai: Another cargo ship has come under fire from Iranian authorities sending jitters through the shipping industry as the vital Strait of Hormuz becomes increasingly unstable.

According to CNN, five boats from the Iranian Revolutionary Guard opened fire in international waters on the 46,105-dwt chemical tanker Alpine Eternity this morning.

None of the crew were harmed, initial reports claim. The ship is now moored at Jebel Ali port.

The Alpine Eternity is manageed by Transpetrol. It is the third ship to be fired on by Iranian vessels in the past month – the most high profile case being the Oaktree-owned Maersk Tigris, which was captured and taken into Iranian waters until a $10m fine was paid by the charterer, Maersk.

“It’s imperative shipowners and operators are aware where their ships are and to ensure proper navigation under ‘innocent passage’. Under this doctrine, international waterways are open for all to travel. Ships should be in close coordination with multilateral government entities like UKMTO, the US 5th Fleet and EUNAVFOR when transiting within the Iranian EEZ,” Kevin Doherty, president of Nexus Consulting, a US security firm, told Splash.

About 20% of the world’s petroleum and about 35% of the petroleum traded by sea, passes through the Strait of Hormuz, which at its narrowest is just 39 km wide.

With additional reporting by Grant Rowles and Holly Birkett 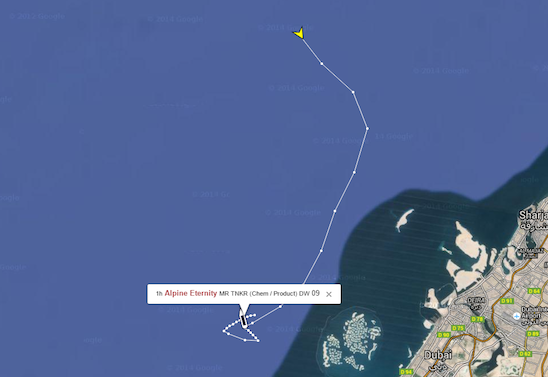 Floating storage play is unwinding but effects are far from over

Floating storage play is unwinding but effects are far from over