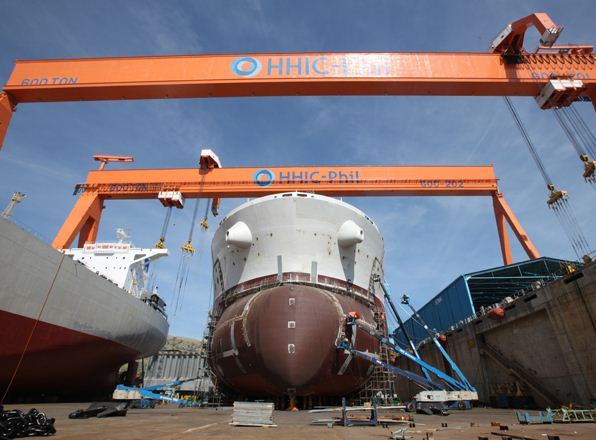 Hanjin Heavy Industries and Construction-Philippines (HHIC-Phil) was officially put into receivership yesterday by the Olongapo City Regional Trial Court (RTC) to start a court-supervised rehabilitation program as five local banks brace for what could be the country’s worst ever loan breach.

The giant yard sought court rehabilitation last week, owing five Filipino banks a total of $412m, and reports claiming it owes twice as much to lenders in South Korea, where its parent is headquartered. A rehabilitation officer has now been appointed by the court.

HHIC-Phil, which is now operating with a skeletal staff, having laid off 7,000 employees last month, is likely to find out its fate within the next six weeks. A creditor’s hearing is due next month while two interested Chinese parties are set to visit the yard in the coming four weeks with a view to taking it over.

Splash understands Cosco Shipyard is one interested party and the other is believed to be a small, private Chinese yard. Cosco Shipyard officials were unavailable for comment when contacted by Splash today.

Under previous management a decade ago, Cosco came close to making a major logistics investment in the Philippines, to the south of the capital, Manila, in a deal that never saw the light of day.

Representatives for HHIC-Phil said in court proceedings yesterday that the yard, which still has 12 ships on its orderbook, had been hit by cancellations and heavy-tail contracts.

The huge yard in Subic Bay delivered its first ship in 2008 and is capable of building the largest ships afloat having delivered a 20,000 teu ship and a series of VLCCs in the past. At 300 ha in area space it is the largest shipyard in Southeast Asia.