Scrubberless shipowners are breathing easier in the knowledge that 24 days into the global sulphur cap era it appears the industry has already passed the peak in terms of price spread between high and very low sulphur fuel oil (VLSFO).

In Singapore, the world’s top bunkering hub, prices for VLSFO peaked on January 7 at $740 per metric tonne and have been sliding ever since, closing yesterday at $627 per tonne, while in Rotterdam prices closed at $516.50. The price has also fallen in other ports around the world.

The price spread in Singapore has now dropped from a high of $343 per tonne to $259 as of yesterday, while in Rotterdam the gap could go below $200 today for the first time.

“The initial uptick in low-sulphur fuel oil prices marked the first wave of IMO2020, whereas the price levels are now declining towards a point of stabilization,” international shipowning organisation BIMCO stated in a release yesterday.

Nevertheless, despite the two fuels getting closer price-wise, BIMCO stated that the investment payback period for a scrubber is still between half a year to one and a half years, depending on the cost of the scrubber and daily consumption.

Ishaan Hemnani, founder of bunker brooking plartform, BunkerEx, told Splash today that waiting times for HSFO are increasing and many traders are only quoting for HSFO on reques, a sign, he said, that liquidity is thinning out. Traders were saying the same thing regarding VLSFO back in September 2019 when VLSFO was not readily available.

Ralph Leszczynski, global Head of research at Banchero Costa Group, said the price spike seen around the turn of the year had come about thanks to short term shortages of the new fuel.

“Once we get over the supply constraints on the new fuels, the spread will gradually narrow,” Leszczynski said today, predicting the equilibrium spread would be somewhere around $180 to $200 per tonne in Singapore.

Adrian Tolson, a director at consultants BLUE Insight, agreed with Leszczynski, saying the VLSFO market is slowly dealing with its early logistics issues, resulting in more competitive prices while the HSFO market is now seeing the results of low demand followed by low availability.

“The future is HSFO as a small volume, logistically challenging fuel choice.  In many ports with no consistent scrubber demand there will no supply.  HSFO buyers will face higher prices and greater bulk to retail premiums even in main ports,” Tolson said.

In an ongoing poll carried on this site, 68% of Splash readers believe the price spread between the two fuels will be less than $200 per tonne by the end of the year. Remarkably, roughly one in eight voters so far believe HSFO will actually be more expensive than VLSFO by the end of 2020.

The fuel price question is one of 10 topical questions posed in our latest MarPoll quarterly survey. To vote takes less than two minutes and there is no registration required. To vote, click here. 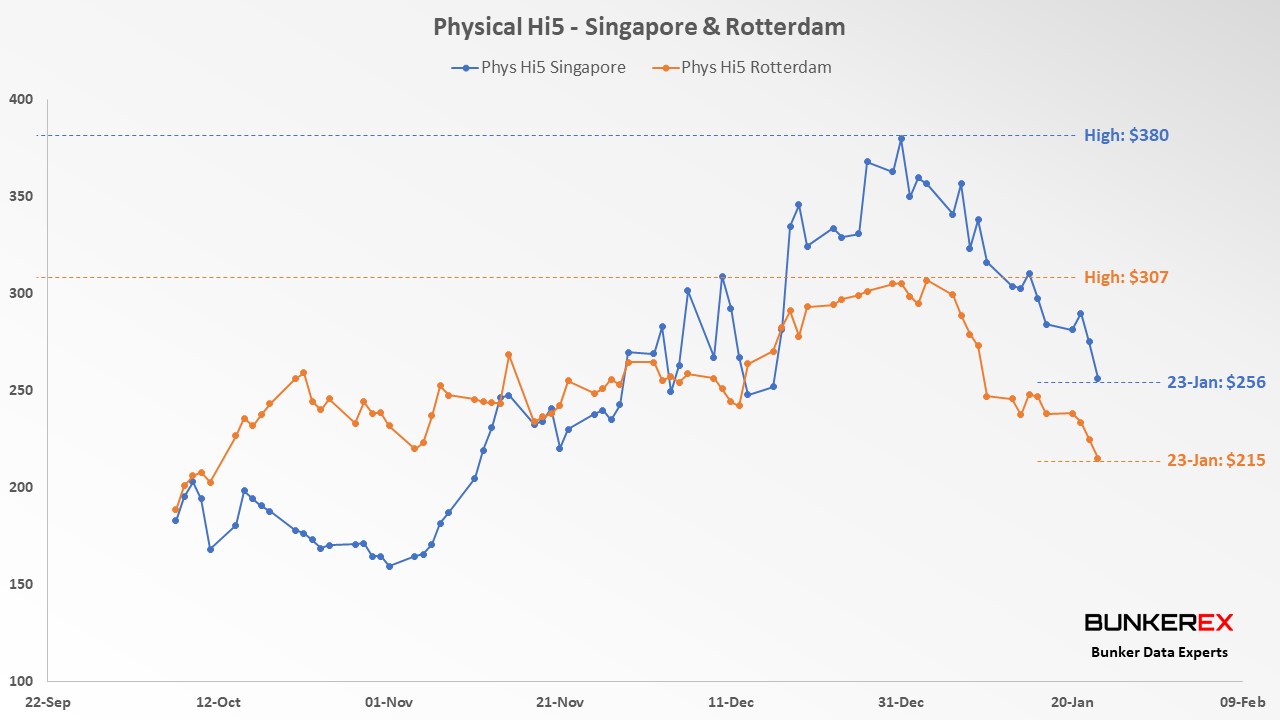