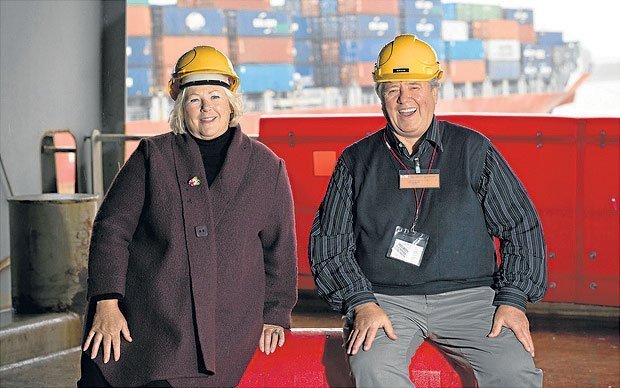 Lee-on-Solent: David and Teresa Stevens are the couple behind what has become on of the most effective tools against piracy.

Guardian works by covering the ship’s safety rails with a specially designed plastic barrier made in one metre sections that slot over a vessel’s rails. Once installed, Guardian provides a robust and simple way of making access to a ship, yacht or rig as difficult as possible.

Guardian was the brainchild of Teresa. She realised that, rather than focusing their efforts on trying to remove pirates from ships, the key was to make it impossible for them to get on board in the first place.

In product testing, the UK’s Royal Marines tried to board a ship protected with Guardian anti-piracy barriers and, after two hours, they gave up and the design was declared a success.

The system is currently protecting some of the world’s biggest fleets including CMA CGM, Maersk, BW Tankers as well as being used to protect offshore rigs and drilling ships.

“Unlike razor wire, Guardian is safe, easy to install and move at port,” says Teresa Stevens. It acts as a barrier both by preventing access and also by restricting the view on deck – enabling crew more security to move about unseen by pirates at sea-level. The units are designed with a high level of UV protection and the polymer does not absorb water, so is ideally suited to a maritime environment.  Guardian is environmentally friendly, saves operating costs by lasting three to five years, and is recyclable.

Once installed the kit does not need to be removed or stored. The only sections that have to be moved are those covering fairleads or chocks. This takes five minutes and are just as easily replaced as removed.

The units are “very well priced”, claims Stevens, and carry a five year warranty. In comparison to razor wire the cost can generally be recovered in 12 to 18 months. Giving the vessel a further 3-4 years of protection, the units can then be sold on to be recycled.

An impressive 7,000 Guardian kits were sold last year and the aim is to quadruple this number in 2014, evidence that the issue of piracy has by no means disappeared despite the threat off Somalia diminishing in the past 12 months.

“Piracy continues to be a worldwide issue, whilst incidents in East Africa may be waning in other parts of the world – Gulf of Guinea and the Indian Ocean are just two examples – attacks are increasing,” says Stevens.

The company is now receiving enquiries from the private sector for the protection of super yachts and cruise vessels.

“The beauty of Guardian is that it is available in any colour, and can be made to look very beautiful for cruise lines and super yachts. This is a line currently in development,” says Stevens. Different sized units will go into production from this July.

Rather than buying the kit, owners might soon have the possibility of renting it. The company is discussing with agents the possibility of keeping units in a transit port to fit to vessels that are just making a single voyage through the high risk area. They will fit the kits and remove once the vessel is safely back.

Ironically, the Stevens are now fighting their own piracy battles.

“While there was nothing like it available on the market before I designed Guardian,” Stevens relates, “sadly as with all great ideas people with no original ideas of their own are trying to steal the design and copy it, we are fighting IP battles constantly.”  [18/02/14]