Around this time 10 years ago I boarded a train from the far southwest of France bound for Hamburg. The ticket I had bought had characteristically been the cheapest available and involved multiple changes and little in the way of France’s much loved TGV high-speed trains. The journey took something like 24 hours and I was able to get through a book or two, not having a smartphone back in those days.

I arrived at the Hauptbahnhof of my favourite German city a tad bleary eyed and in need of a shower. Immediately, I noticed something had changed, something drastic, and not just in this Hanseatic city, but the world over. The suited city types were making their way to work looking shell-shocked; a glance at the local Hamburger Abendblatt explained all: ‘Lehman Brothers declares bankruptcy’, read the front page headline. Our world had changed on that train ride, and for shipping its darkest hour was now starting – an ‘hour’ that became among the longest downturns shipping has experienced since records began. 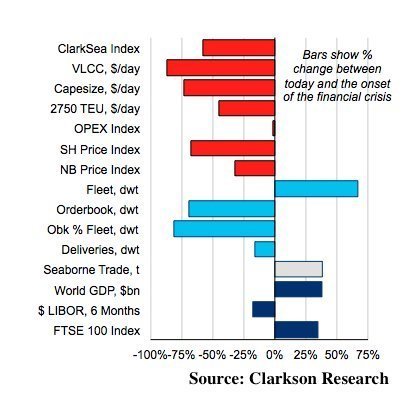 Of course, with hindsight, there were multiple signposts telling all of us this disaster for shipping was fast approaching.

Graphs now show for most sectors we should have bailed by mid-2017, notable analysts led by Splash columnist Charles De Trenck (to my mind the finest analyst of the previous decade, albeit someone who was bearish by nature) had called the end of the good times, while some of the smartest shipowners were voicing caution as cape rates regularly went into unchartered six-digit territory. I well recall, for instance, BW supremo Andreas Sohmen-Pao, speaking at an opening session at Sea Asia around this time, quoting Warren Buffett, whose memorable quote on irrational markets is worth repeating in full here.

“Nothing sedates rationality like large doses of effortless money. After a heady experience of that kind, normally sensible people drift into behaviour akin to that of Cinderella at the ball. They know that overstaying the festivities — that is, continuing to speculate in companies that have gigantic valuations relative to the cash they are likely to generate in the future — will eventually bring on pumpkins and mice. But they nevertheless hate to miss a single minute of what is one helluva party. Therefore, the giddy participants all plan to leave just seconds before midnight. There’s a problem, though: They are dancing in a room in which the clocks have no hands.”

The fact is most of us felt the party had a second or third wind; it didn’t, and we were all badly winded. Shipping has changed irrevocably since Lehman Brothers collapsed.

What are the greatest changes since the US’s fourth largest investment bank fell? I’d argue that it hastened the inevitable rise of China to the top of maritime foodchain, not just from an owning and building point of view, but also in financing where it has taken over the roles previously held by many now decrepit European banks.

As Splash columnist Dagfinn Lunde noted recently there has been no greater loser in the last decade than Germany, a nation of shipowners who found themselves massively exposed with the wrong ships and financing come September 2008. 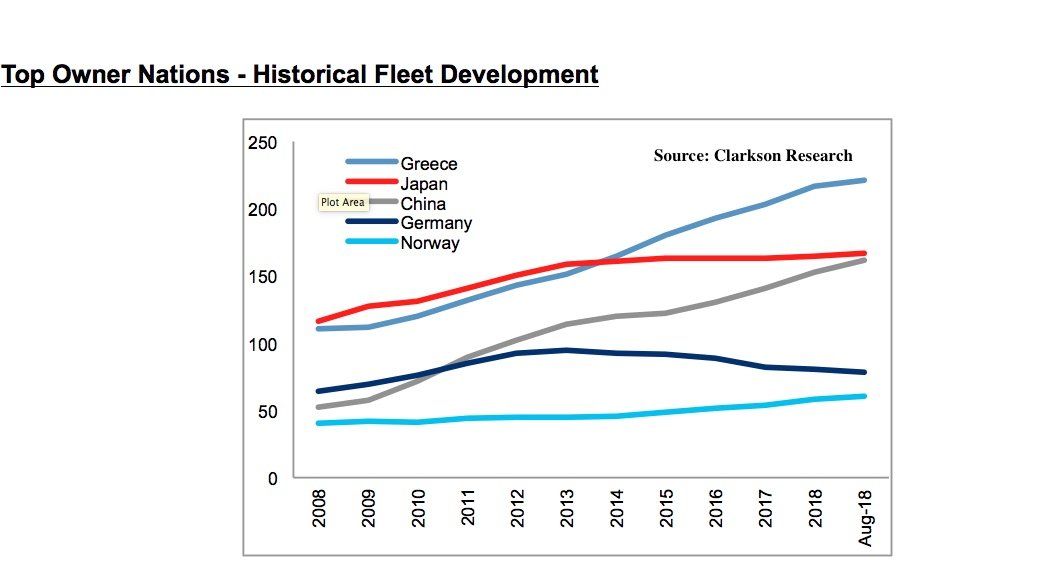 The paucity of traditional ship finance – and dire rates – also helped usher in the unprecedented era of consolidation in shipowning. Previously one of the most fragmented of global industries has become far more concentrated in terms of ownership in the past 10 years.

I feel very fortunate to have been a reporter in China during the supercycle of the last decade. Increasingly though what I feel is that those unreal months in the lead up to September 15, 2008 will never be repeated, and maybe that is not a bad thing for the overall long-term health and rationality of this industry. Nevertheless, our industry’s inability to learn from past mistakes continues to manifest and shock. According to Clarkson Research, trade since the financial crisis has actually grown 38% to 12bn tonnes but the fleet has grown 67% in dwt terms. We do not help ourselves climb out of the abyss too easily.