Better earnings will power a recovery in newbuilding activity, while rising yards costs and the ongoing squeeze on capacity are driving price increases, writes Stuart Nicoll from Maritime Strategies International.

Near term contracting for newbuildings tends to be driven by the freight rate environment and our view of improving earnings in a number of key sectors over the next four years underpins our forecast for a step up in aggregate newbuilding activity over that period. Driving the improvement in earnings is a mixture of rising cargo demand (from increasing trade) and low rates of fleet growth.

All sectors will see positive trade growth over the period with near-term strength in dry bulk and LNG.

Oil and containers are likely to see consistent expansion at lower rates of growth. The composition of oil trade is likely to shift to products in 2020 as the fuel regulations begin to bite.

The second plank in our recovery story for the main shipping sectors is fleet growth, where we expect a deceleration in expansion over the next five years, that will help to improve the supply demand balance in many sectors.This is partly due to a forecast drop in deliveries – itself a corollary of the drop in contracting during 2016 and 2017 and the end to significant slippage.

But it is also heavily dependent on our expectations for a big step up in scrapping, given the tightening regulatory environment. 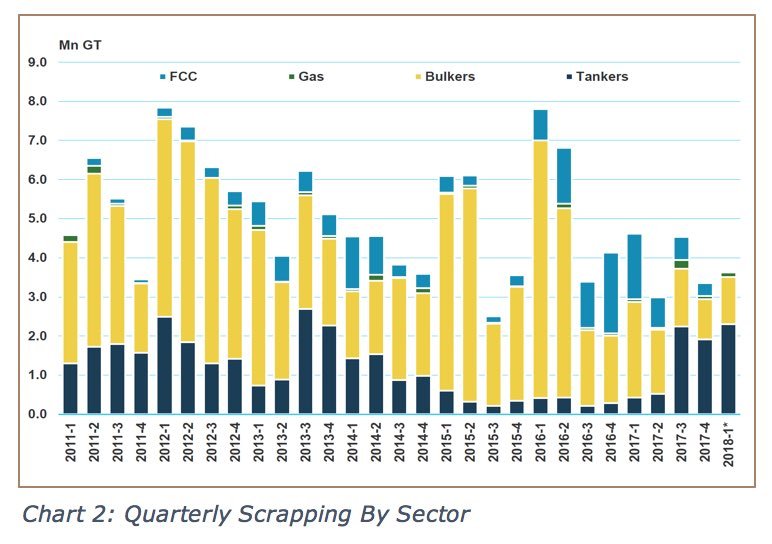 Newbuilding prices past the trough 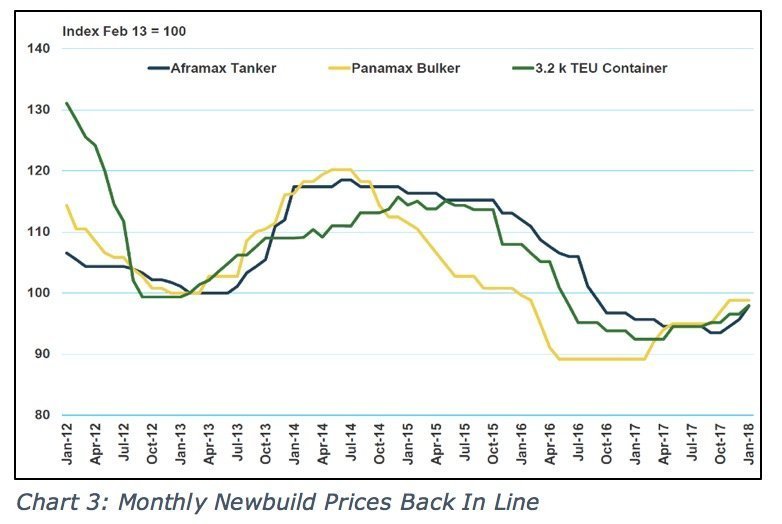 As well as rising orderbooks, Forward Cover is also being boosted by ongoing shipbuilding capacity reductions, especially this year as the full impact of rationalisation announced/implemented in 2017 is fully captured on an annual basis. Capacity will also dwindle as the final orderbooks at some doomed yards are delivered.

MSI also monitors and forecasts ship yard costs and these have escalated rapidly over the last two years and go higher in 2018, before being largely stable over the period to 2021. The net effect of these changes is to place us firmly on the recovery trail in 2018, with the prospect of a more accelerated increase in newbuilding prices during 2019.

MSI expects the next peak newbuilding prices in 2021, having made an upward revision with our most recent Shipbuilding Industry Planning Service report.

Most prices will match or exceed levels in the last peak in 2013 on an annual average basis, largely due to a stronger Forward Cover picture in that year, while our shipyard cost index will actually be lower than in 2013, due to lower steel prices and a weaker Yen and, more surprisingly, the Yuan too. The latter is predicated on a slow return to strengthening as the recent weakness in the currency decays.

The current low newbuilding prices should in theory provide an excellent opportunity for owners to secure bargains before the anticipated upturn in earnings in a number of shipping sectors.
A surge in activity has been seen this year in the oil tanker and LNG sectors, with a number of independents placing new orders. The alignment of the stars also remains favourable for the dry bulk carrier sector.

A further impetus to newbuilding investment is the resurrection of the narrative around ‘eco’ tonnage in a high fuel price environment as 2020 approaches. The strength of the eco argument weakened along with the oil price during 2015-16, but with a surge in marine gas oil price built into the futures markets, on top of some recovery in the oil price, a return to prominence could be on the cards.

But despite all these positives, there are counter arguments to joining the rush to the newbuilding yards, not least the uncertain regulatory environment.

While all newbuildings should now meet NOx Tier III and BWMS regulations, the solution to the sulphur cap is yet to crystallise. Fitting scrubbers to newbuildings is a lot easier than to existing tonnage of course, but there are still operational issues to contend with, not least disposing of waste products.

And then there are CO2 emission regulations that are just around the corner and may seriously undermine the attractiveness of ‘conventional’ tonnage with a 25-year lifespan. Dual-fuel engines could provide some flexibility here, opening the way to alternative lower carbon fuels, but there is no clarity on which fuel.

LNG has been touted by many but this not a viable industry-wide solution to lowering CO2 emissions. The trick is to invest in a newbuilding that is flexible enough to accommodate whatever fuels and technologies emerge as the preferred solution. At the simplest level that may be just a flexible engine design, able to run at low speeds, should that emerge as the most viable short-term solution to reducing C02 emissions.

CMA CGM looks to set up biomethane production in France

CMA CGM looks to set up biomethane production in France