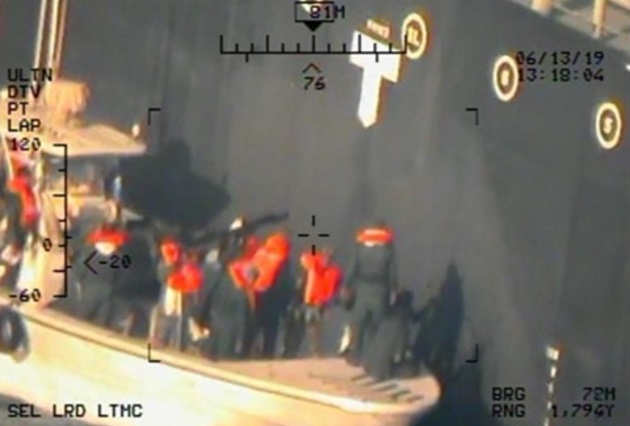 Japanese politicians spent Sunday debating whether the country’s Self-Defense Forces (SDF) troops should take part in a US-proposed coalition to safeguard strategic waters near the Strait of Hormuz, something that might require amending the nation’s constitution.

The US is pushing for an international naval coalition to protect ships in the Middle East, after six tankers were attacked in the past two months, including one Japanese ship (pictured), with president Donald Trump recently singling out Japan and China’s need to chip in with the proposed military buildup.

Taking part however has divided Japanese political parties with some claiming any involvement would require an amendment to the country’s pacifist constitution put in place after defeat in the Second World War, something prime minister Shinzo Abe has been keen to change for a number of years.

Koichi Hagiuda, executive acting secretary-general of the ruling Liberal Democratic Party (LDP), went on television after the debate, saying: “Cooperation with the international community is important. Some 80%of vessels transporting (oil) to Japan pass through the strait.”

Tetsuo Saito, secretary-general of Komeito, the junior coalition partner of the LDP, said Japan should consider how it can make contributions by looking at the law on the fight against piracy, under which maritime SDF vessels and patrol aircraft were sent to waters off Somalia.

One possibility could see the SDF dispatched for maritime security operations, a move which would fall within the current law. The SDF is allowed to protect Japanese ships as well as vessels carrying goods bound for Japan and can conduct on-the-spot inspections of suspicious ships. But the scope of such operations is very limited and weapons can only be used for self-defence.

Another option up for debate is to create a special one-off legislation. The issue will be debated further in the Diet – Japan’s parliament – next week.

Last week the chairman of the Joint Chiefs of Staff in Washington, General Joseph Dunford, said he expects a naval coalition to start operating in waters off Iran and Yemen this month.

At a press conference last Tuesday, Dunford said America was confident allies would sign up soon to a US-led coalition to safeguard merchant shipping in the Middle East.

Under the plan, the US will provide command ships and lead surveillance efforts for the military coalition. Allies would patrol waters near those US command ships and escort commercial vessels with their nation’s flags.

“We’re engaging now with a number of countries to see if we can put together a coalition that would ensure freedom of navigation both in the Straits of Hormuz and the Bab Al-Mandab,” Dunford said.
Naval ships from the UK, India and a host of Middle Eastern nations have already been escorting commercial ships through the Strait of Hormuz in recent weeks.