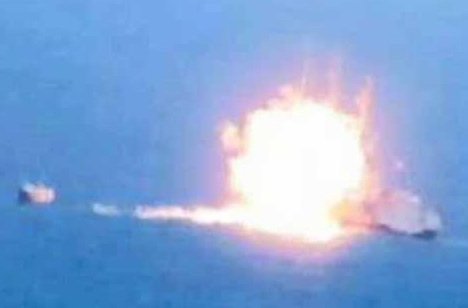 A small Iranian general cargo vessel was hit on Wednesday night by a rocket off the Yemen coast with seven Pakistani seafarers killed. An eighth man was able to swim to shore.

was en route from Egypt to Dubai when it was attacked. The ship exploded and sank with only the chief officer able to jump into the sea and escape the inferno.

Earlier this month at least six Pakistani sailors were killed when their ship was bombed by Saudi jets off the Mokha coast in the Yemeni province of Ta’izz.

Growing fears of attacks in the area has seen the UK deploy its most advanced warship off the coast of Yemen.

With a Teekay LNG carrier and a number of naval ships coming under attack in recent weeks and concern growing that terrorists are planning more suicide attempts in the narrow Bab al-Mandeb Strait, the HMS Daring was sent last month to help commercial ships transit the area.

The strait links the Red Sea with the Gulf of Aden.

Kevin Doherty from Nexus Consulting told Splash last month there is a significant risk to all ships around Yemen from rockets, and that risk seems to be indiscriminate, being fired at any ship of opportunity.