It is by now not news to anyone in the container shipping industry that rates are extremely volatile. Nor is it news that they appear to be collapsing quite frequently.

However, looking more closely at the developments in the past five years, it is very clear that 2014-2015 has seen a very sharp – and worsening – trend in essentially all major deepsea trades out of Asia.

Using the spot rates from the Shanghai Container Freight Index, it is possible to look at trends in weekly rate changes. Instead of looking at actual freight rate changes, it is more relevant to look at rate changes in percentage terms, as this is a much clearer indication of the relative importance of a rate change in any given trade.

As an illustration, the attached figure shows the weekly rate changes in the trade from Asia to North Europe for weeks wherein rates have declined. The development seen is very clear. From 2010 to 2013, weekly rate declines tended to be less than 5%. In 2013 to mid-2014, this doubled to 10%. Then from mid-2014 to the present date, the weekly rate erosion has constantly increased to the point where a weekly rate decline of a staggering 25% is no longer uncommon.

For other trades such as the transpacific, Asia to Australia and Asia to East Coast South America the same trend is seen.

A key question is whether this trend will continue, and looking at just a few key numbers the answer unfortunately appears to be a clear ‘yes’.

According to Container Trade Statistics, global demand for container transportation has grown a paltry 1.2% in the first five months of 2015. In the same period the global fleet has grown 3.6%.

According to Alphaliner, global fleet growth is predicted at 8.8% in 2015 overall. If global demand growth is to match this development, it would require a 14% year-on-year demand growth globally for the period June to December 2015. That is a growth rate which appears entirely unrealistic – especially when considering that the pivotal Asia-Europe trade has actually declined by more than 3% in the period until May.

Adding insult to injury, fuel prices have begun to decline again. In the wake of the fuel price declines in late 2014, carriers expressed a desire to retain part of the fuel price savings. The freight rate developments seen thus far appear to indicate that such ambitions were far from successful. According to Bunkerworld, bunker fuel prices have declined almost 25% since mid-May, and this decline will now begin to materialise in the shape of reduced BAF levels on key trades.

Hence the combination of continued excessive capacity growth when compared to actual demand developments, and a fuel price which is once more rapidly declining, leads to the inevitable outlook that the storm the industry has been in lately is not abating, it is intensifying. 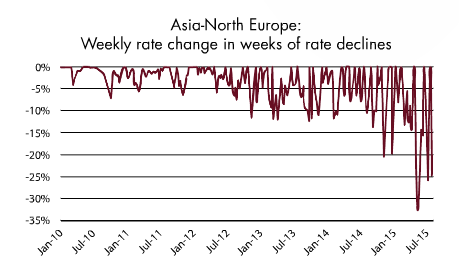 This article first appeared in the most recent issue of Maritime CEO magazine. Readers can access the full magazine for free online by clicking here.

Singapore: ‘Partnership is key in the decarbonisation journey’

Singapore: ‘Partnership is key in the decarbonisation journey’