Thetius founder Nick Chubb lets Splash in on a topic that has been troubling him of late while attending myriad maritime expos. With the rise of technology, the time has come, he argues, for people other than the ship’s captain to share the burden of responsibility that comes with the command of a vessel at sea.

I’ve attended a lot of conferences and trade fairs recently, and it is fantastic to see a plethora of new tools and technologies coming onto the market to aid operational decision making on the bridge, improve situational awareness, or even remove human operators from the loop entirely. That said, the more these technologies evolve, the more questions need to be asked and answered regarding the division of responsibility and liability when things inevitably go wrong.

Picture the scene, you are wandering round the hall of a giant maritime trade show somewhere in Europe. You’ve been walking for what feels like miles and you are looking for something highly engaging to wake you up from your heavy lunch / hangover / jetlag, that doesn’t involve a VR headset. You walk past the stand of a major OEM and spot a large touchscreen and some snazzy visuals. You wander over to investigate, before you’ve even realised what you’re looking at, a sales rep thrusts a business card into your hand and launches into a slick pitch. The system on display does everything from automatic collision avoidance, to fuel optimisation, to making the now redundant officer of the watch a cup of tea. On the screen, you are watching a ship flawlessly conduct a complex piece of coastal navigation in a high traffic area.

You begin to ask some basic questions like, “How does the system apply the Colregs?”, “How does passage planning work?”, “Can it take a visual fix?”, “What happens if there is a GPS error?”, “Can it make coffee as well as tea?”

What comes next appears to be a stock response. The sales rep stops, looks into the near distance as if deep in thought for a moment, and then says with absolute confidence: “Of course at the end of the day, the final decision is the master’s responsibility.”

This statement is repeated so often and with such word-for-word accuracy across the maritime technology industry that I fear I missed a memo letting everyone know what to say when a tricky question is asked. At this point, you realise that debating the finer points of the Colregs with this particular sales rep will frustrate you as much as it entertains you. You thank them for their time and head over to a lecture hall to listen to a panel discussion about AI powered digital blockchain twins.

Shipping has evolved a great deal in the last few centuries, but ‘the master’s responsibility’ has not. Back in the days when ships were made of wood and men made of iron, the master was god. He was both feared and revered by the men on board.

What he said was gospel, and his orders were followed without hesitation. Once outside of a pilotage, a ship became an independent entity, and the master was solely responsible for ensuring that it, the crew, and the cargo arrived safely at the next port, rightly so.

Today, basic bridge resource management tells us that the men and women who crew the world’s ships should question the master’s decisions, even overrule them in extreme circumstances. Passage planning is now often sent ashore for approval, if done on board at all. Shore based monitoring stations are able to track entire fleets, ready to call the bride of a ship 4,000 miles away if it goes outside its approved cross track distance. The Sea Traffic Management project in Europe has even successfully trialled sending a new passage plan direct from a VTS operator’s computer to an approaching ship’s ECDIS.

While there is no doubt that these initiatives serve to make ships safer, it is also safe to say that a ship is no longer an independent entity, and the master’s word no longer gospel. Yet, despite all of these inputs from ashore, the master is still solely responsible for the safety of ship, crew, and cargo.

This is further compounded when the commercial reality of operating ships rears its ugly head. At the height of the Somali piracy crisis, I stood on the bridge of a fully laden tanker and listened as the captain was asked to alter a passage plan during a voyage. The new plan would allow the ship to arrive two days earlier but would mean sailing through the Gulf of Aden’s high risk area with no security on board. The captain was, of course, told that “at the end of the day, it’s your decision,” but the conversation was saturated with a subtext that said; If you ignore us you will be discharged at the next port”. We changed course.

We have recently seen, with devastating consequences, what happens when decision making software is installed to a vehicle without the operators’ full understanding or consent. The Boeing 737 Max aircraft was fitted with a “manoeuvring characteristics augmentation system” that was designed to adjust the aircraft’s pitch in such a way that a pilot would not notice the difference between the Max and its predecessor, the 737NG. The system relied on input from a single sensor at any one time, and could not be easily overridden by the pilots in command of the aircraft. There were many contributing factors that went into the 737 Max disasters, poor system design, alleged corner cutting at Boeing, and poor training among them. Ultimately though, 346 lives were lost because a computer system, designed with the best of intentions, took too much control away from the pilots responsible for safely flying the plane.

This is not just a problem of software and technology. As land based navigation support continues to grow in popularity, we should be questioning the rights and responsibilities of those providing it. Standards for seafarer training and certification are covered by a 98,000-word legally binding convention (STCW), whereas the IMO’s only rules on Vessel Traffic Services come from a single regulation made up of just five lines in the Safety of Navigation chapter of the SOLAS Convention. The regulation itself is so full of “in their opinion” and “endeavour to” get out clauses that there is really no legally enforceable requirement for either the adoption of, or the proper running of, Vessel Traffic Services around the world. There is no silver bullet to this problem. In aviation, air traffic control regulations have evolved over a number of decades and a command hierarchy exists that bestows rights and obligations on all parties involved in the safe navigation of the skies, but still ultimately leaves the aircraft’s captain in charge.

I don’t believe there is any other safety critical, asset intensive industry that puts such a level of legal responsibility on the shoulders of one individual, often for months at a time with no reprieve. The inevitable advance of autonomous technologies and collaborative decision making tools will continue to change the power dynamic between ship and shore, and as both a technologist and a seafarer, I welcome that shift. Technology has the power to make the seas safer, and the lives of those who ply it better. But equally, if we insist on eroding the decision making power, authority, and ability of our master mariners from the comfort and safety of our offices, we must also be willing to share the burden of responsibility that comes with the command of a vessel at sea. 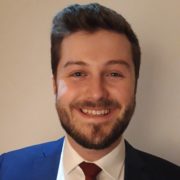 Nick Chubb is the founder of maritime innovation consultancy Thetius.