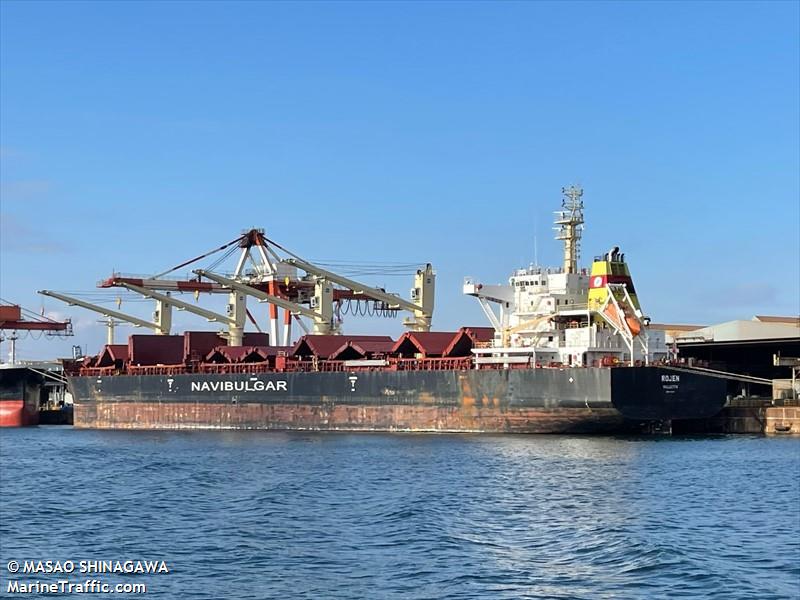 bulk carrier (pictured above and below) is readying to depart Ukraine’s port of Chornomorsk today, the first vessel to take part in the the Black Sea Grain Initiative, a deal struck between warring neighbours Ukraine and Russia last week and overseen by Turkiye and the United Nations.

The Rojen altered its AIS destination two days ago with UK’s Teesport now the destination. Additionally, the vessel’s draft has changed since Wednesday, suggesting it is being loaded, and it has also changed berths in the port.

The passage of the ship, owned by Navibulgar and insured by the West of England P&I Club, will be eagerly watched to see if this new deal is a viable option to shift the more than 20m tons of last year’s harvest backing up silos and ports across Ukraine.

The vessel is one of more than 80 ships marooned in Ukrainian waters since Russia invaded on February 24 leading to the shutting of all the country’s sea ports.

Under the Black Sea Grain Initiative, three ports have been given the go ahead to move grain – Chornomorsk, Odesa, and Yuzhne – and extensive sea mine clearing has been conducted this week to allow vessels in and out.

To monitor the operation and schedule vessel arrivals, a Joint Control Centre (pictured) has been established in Turkey, staffed by UN officials.

The World Food Programme, a UN organisation, is leading several discussions in relation to freight rates for future shipments during the 120-day period granted for the Black Sea Grain Initiative, with large quantities of these volumes destined for sub-Saharan African countries which have struggled importing food at such high prices.

According to brokers Braemar, enquiries have been largely for handies given their size due to the shallower draft requirements in some ports in Africa. Rates discussed will be for time charter on short-period.

“Due to the time pressure of the situation and risk of heading to Ukraine amid plenty of safety concerns, these Handies are unsurprisingly commanding a considerable premium to any period rates currently being discussed in the Atlantic elsewhere,” Braemar noted in a dry bulk markets update.

Based on the estimates of 20m tonnes needing to be shipped over the coming four months, Braemar estimates 371 or 715 loadings on supramaxes and handies, respectively. As enquiries have been largely handy-based thus far this week, it is safe to assume these will make up the majority of the vessel-mix potentially lifting these cargoes.

“The positive momentum for cargo order volumes for agricultural commodities loading in Ukraine has continued to build during the week,” Ulf Bergman, senior economist and quantitative analyst at Shipfix, told Splash today. “Volumes for the week look set to be the highest since late February by quite a margin,” Bergman added.

Since the war began, weekly volumes have been modest. Typically less than 100,000 tonnes per week. However, during the first four days of this week, aggregate volumes have topped 450,000 tonnes, and with a few days left of the week, there is some potential for further increases.

Exporting operations out of Ukraine are expected to be considerably slower than what would typically be the case without war despite the time-pressure. First, authorities will undertake a full inspection of each vessel headed to pick up grain at a Turkish port to search for weapons, before the ship can head into the Black Sea towards Ukrainian ports, something that is estimated by Braemar to add on extra three days per voyage.

“The rush to position a large amount of vessels quickly, implies we expect to see queues both in Turkey and outside Ukrainian waters waiting for escort into ports if enough vessels make themselves available. In this scenario, the estimate of 3 days is likely on the low-side,” Braemar cautioned.

Overall, Braemar analysts said they remain sceptical over the capacity to which Ukraine will export grain from its ports given the war’s volatility, something that security consultancy Dryad Global also discussed in a report published earlier this week.

The first week of the operation will be highly significant for the initiative, Dryad Global argued, as these types of agreements are most vulnerable to being broken in their early days.

“Whilst there are strong reasons for Russia to act strictly within the bounds of their agreement with Turkiye and prevent any attacks on grain terminals and ships, this conflict has repeatedly demonstrated the importance of never assuming Russia will behave within the bounds of reason,” Dryad Global warned.