Dr Lynn Simpson on what happens when an animal makes a bolt for freedom.

Escapees in live export are not uncommon. Can you blame them? I was usually pretty keen to get some time away from the ship at the end of a voyage myself; and I had the better accommodation.

During loading in Australia there were often escapees on the wharf, but having well-fenced ports, and a common language meant they are generally caught with minimal fuss and returned to the ramp for loading. We knew in Australia to give the animal/s time to settle and usually recapture was relatively easy. Difficulties arose when the animal/s, especially cattle would find their way into any port area full of tightly parked brand new cars, freshly delivered by a car carrier. “He’s in the Hyundai’s” would be one of the funniest comments I took away from my stevedoring days. Trying to gently get a Brahman bull out of hundreds of cars with minimal damage to either was a delicate dance. Not always achieved successfully, the odd side mirror left hanging at a jaunty angle.

Most of the escapees I dealt with were during unloading overseas. It was usually due to poor quality or management of the trucks. Less fatigue and better truck loading management could avoid many of these scenarios. The animals would get to the end of the ships ramp and some twit would forget to shut a gate, or let a truck drive away without closing the door or try to put too many cattle into each truck. The cattle would see a gap and just go for it. Leap off the truck or platform; generally stop in shock as to the space they found around themselves and then take off at speed.

One exception witnessed; I was working on the wharf and heard a serious scream from the ship. I looked up to see two crew members running for their lives along an external walkway of our enclosed ship, the bull chasing them was right on their heels, they got to the engine room entrance and ducked in. The bull couldn’t stop in time to follow and the men pulled the door shut behind them. That could have ended very poorly. It was like watching a mini version of the ‘running of the bulls’ in Pamplona, a tourist attraction for idiots that I will never understand.

It takes finesse to recapture escapee cattle and sheep safely. Something the shore crew usually didn’t posses. The ships stockmen and myself would normally be called to the wharf to do the job. All going well, we sneak up on the animal and sedate it if it’s a bull, catch it if it’s a sheep.

We sedated the cattle with a Westergun, essentially a spring-loaded syringe on a pole. The animal would either run away and if left alone to calm down, fall asleep within about half an hour, or take offence, turn around and try to attack you.

Once asleep you could usually sneak up on the animal, immobilize it further by holding its head down and your teammate would quickly tie its legs up. The sedation rarely makes an animal totally immobilized. The animal below was such a scenario. We needed to move him back to a truck for recovery and transport to the feedlot. He’s alive and semi conscious, but suspended briefly by a forklift. Not conventional, not cool, not mentioned in any Vet textbook- yet practical. 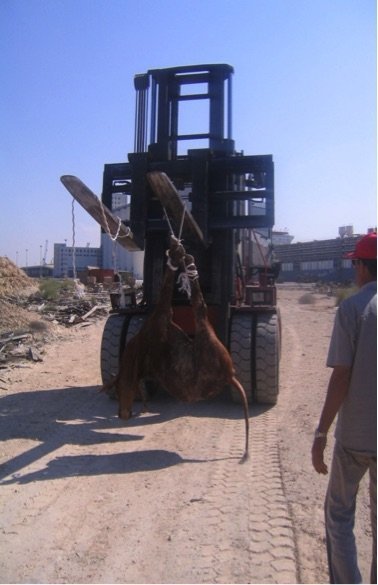 If you missed with the sedation then a pursuit was engaged. This sucked; as we usually had to get into the back of a small truck with some overexcited stranger with no English driving at speed to catch up to the animal. Meanwhile we were hanging on for dear life and trying to inject a moving target.

Dangerous for all involved.

If the animal was chased too hard they occasionally jumped off the wharf into the port or the sea. That’s when it got really interesting and poor results often ensued.

The bull pictured below had fallen off of a truck, shore crew chased him and he ended up in the water. I was called down from the ship to “fix the problem”. By the time I got there his head was wedged between the ships hull and the wharf. If I had have had an X ray machine I’ve no doubt his skull would have shown fractures. As the ship gently heaved to and from the wharf I used a long piece of wood to push his head under the water and he sprung up a few feet forward. Utilizing the taper of the lower hull had been enough to free him. We got ropes around him, used a forklift to get him out of the water and into a truck. 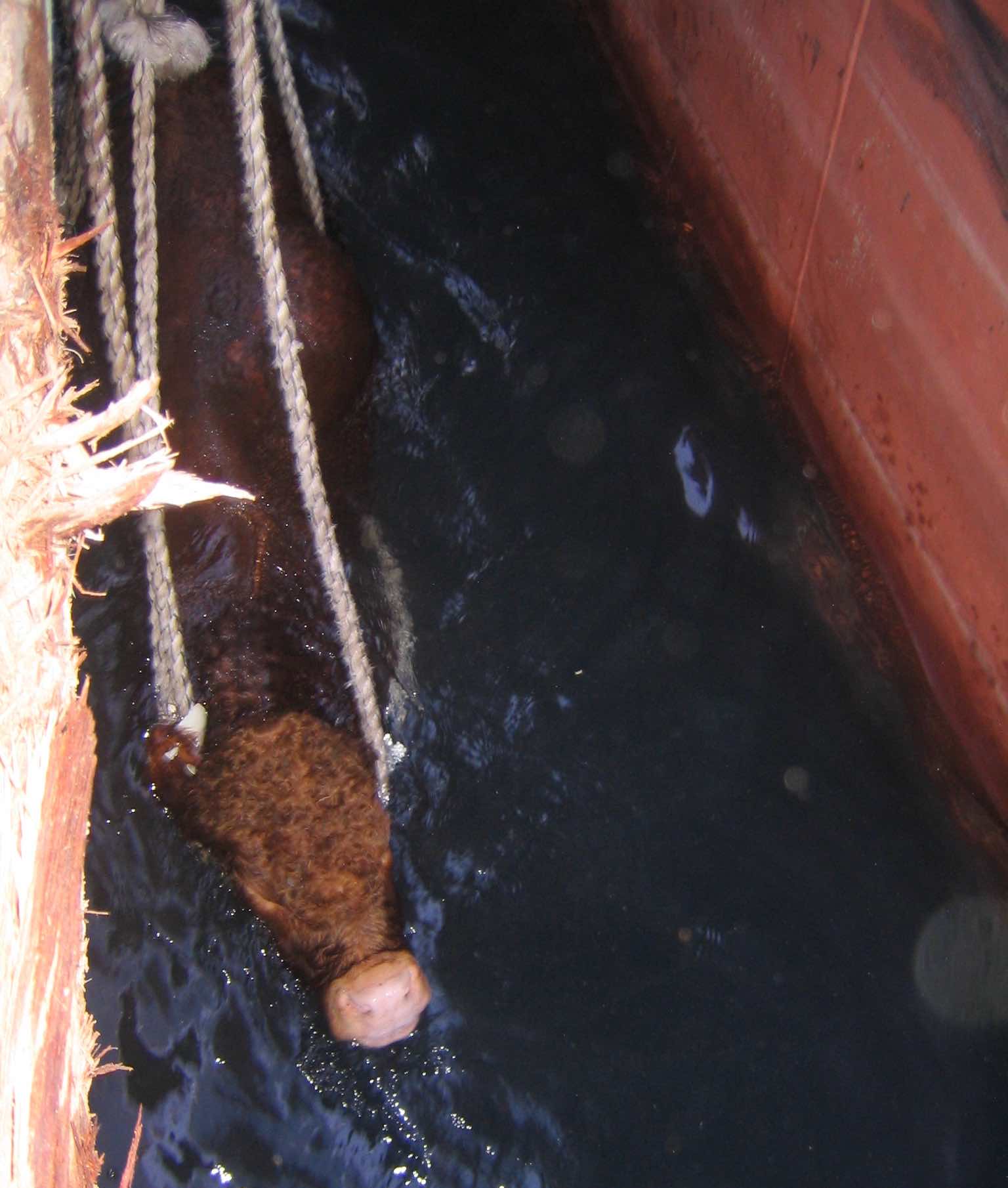 He died before I could shoot him.

The bull in the header image was one of two that escaped from a truck in Israel. He jumped in the water and soon returned to port and was roped in the rocks around the wharf, lifted with a forklift and returned to a truck. His cheeky friend was never going to come back. He started swimming directly across the gulf towards Jordan. I jumped in the water and started swimming after him. I managed to turn him around and head him back to Israel after a not so fun game of ‘splashies’ and getting covered in snot by a cranky bull in the sea. The two stockmen I was sailing with soon joined me. The three of us worked like sea sheep dogs. The bull swam across a shark-proof net. My first big wake-up call that we were definitely in the wrong place. He ran up the beach as sunbakers looked up in shock.

Fortunately he had come ashore in the fenced off grounds of the Eilat Dive Club. We got the place evacuated and ended up sedating him in the clubs restaurant. Awkward, fortunately the Israelis were cool about it. Once sedated and tied up he was taken by trailer to the feedlot for recovery. 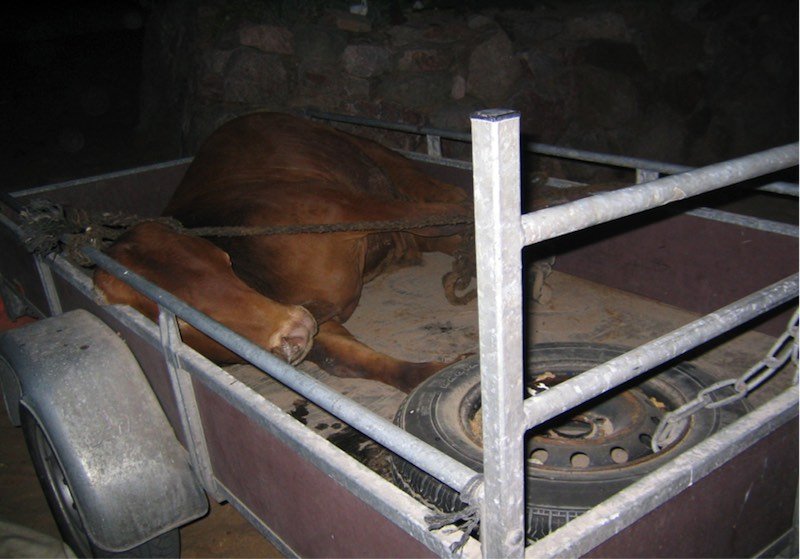 He certainly made the Israeli news that week.

Across the Gulf on another voyage we were unloading sheep in Jordan. One of the crew whom I had been teaching English came to me saying, “Big fish Doctor, big fish, you come look”. I wasn’t that excited about seeing a big fish, but he had spoken so well I didn’t want to disappoint him. I finished what I was doing and walked to the non-unloading side of the ship and looked down. WTF!? “That’s not a big fish” I said, “That’s a whale shark!” It was glorious. About 3 foot across the head and simply beautiful, gliding up and down the length of our hull. I suspect it could smell us, hell; people in the next country could probably smell us.

Later that night a sheep ended up in the water, I got in to bring it back, but it swam around our stern into the darkness. Call me a chicken, but I didn’t follow. I wasn’t afraid of running into the whale shark, but I wasn’t keen on running into one of his meat-eating friends in the dark. The sheep was never seen again.