Food for thought, perhaps? Ships clearly pose risks for animals, many due to the inherent nature of everyday shipping.

However, sound understanding of the interface of operational shipping and animal behavior incorporated into a ship’s design could make a ship safer for all onboard.

Cheap, sensible, risk mitigation measures could be applied to many ships, if not the entire global live export fleet. Having spent so much time managing this unique interface of animal behaviour and shipping, I’ve identified many unnecessary risks. Unfortunately, some too late.

One major risk to animals onboard is having the ability to enter areas not designed for them. I’ve discussed these risks with brilliant shipping engineers and regulators, but sadly, they often do not have the appreciation of both animal behaviour and shipboard operational risks, as they have never sailed on a loaded voyage.

On one of my earlier voyages I found the bull pictured below lying collapsed and not willing to stand on day one of loading. Several potential causes: illness, injury, fatigue. He was in a pen on one of the lower decks. Pen-mates were removed, protecting him from being trampled and allowing him to rest. We propped him upright with bags of chaff, provided, medication, also food and water within easy reach and rolled him every six hours to reduce pressure sore development. 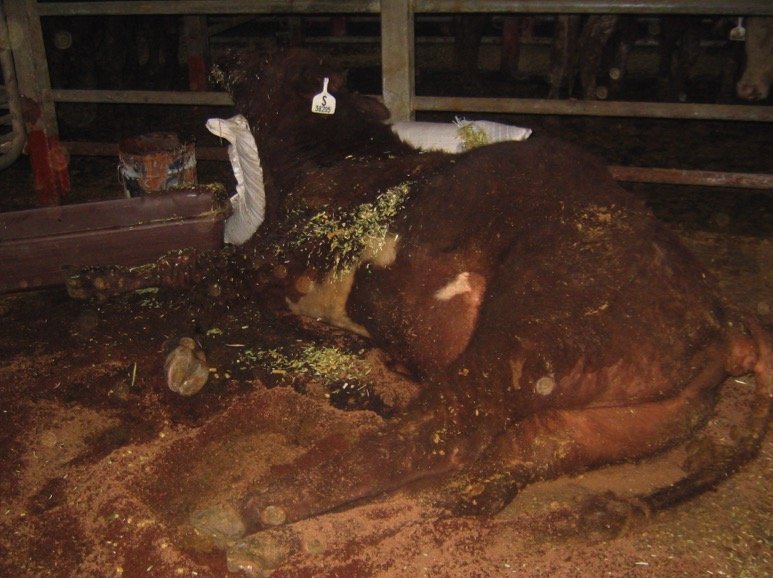 Two days out of port his condition was not improving, I made the ‘call’, and shot him. As the crew and I were cutting him up, one of the crew stated that he thought he must have been in a lot of pain. “Possibly” I said, “but I don’t know what the cause of his problem was.” The crewmember sheepishly looked at me and explained that during loading the bull had taken a wrong turn and fallen two decks down an elevator shaft; they had dragged him to that pen.

I would have shot the bull immediately had I known, who knows what was broken? From then on I was fastidious about closing elevator gates.

Years later, on another ship, I found two cattle during the same voyage in the same pen with clean leg breaks at different times. Cattle are generally big and strong. If they get their leg caught through a railing they can easily snap them. But these breaks were unusually ‘clean’. 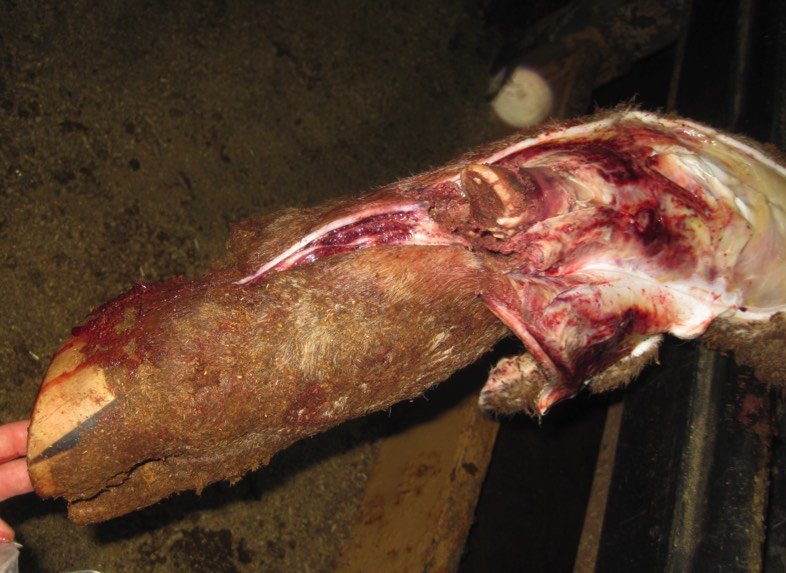 I looked for another reason, and then the elevator came past carrying chaff to the lower decks. Voilà. Their legs must have been protruding through the rails as they lay in their crowded pen trying to rest. This is common behaviour, but sadly on these occasions protruding into an elevator shaft. The crew operating the elevator would have been on upper decks, unaware these incidents had happened. That was twice on one voyage. How many times had this happened before? I asked for small gapped weld-mesh to be fitted around all risk areas to prevent repeat protrusions and subsequent breaks. I reported my concerns to the authorities.

Cause of deat: Misadventure – passing elevator.

Ships need hatches and elevators. Many provisions are stowed on the roof or upper decks. When needed they are sent down by elevator or crane. The heifer in the header image is not a relative of Superman. She died, and was removed whole with a crane. A seemingly flying heifer is not something you get used to quickly.

The hatch covers propped open for her upward journey are small and sit at knee height. If a crewmember was not paying attention one could easily fall in. They are not offset. The crewmember or stray animal would likely take a fall multiple decks. It wouldn’t be a pretty sight.

I know this for a fact after shooting a large heifer who fell down a large cargo hatch and landed on a closed one, three decks below. She’s the slumped black lump in front of the wheelbarrow in the image below. 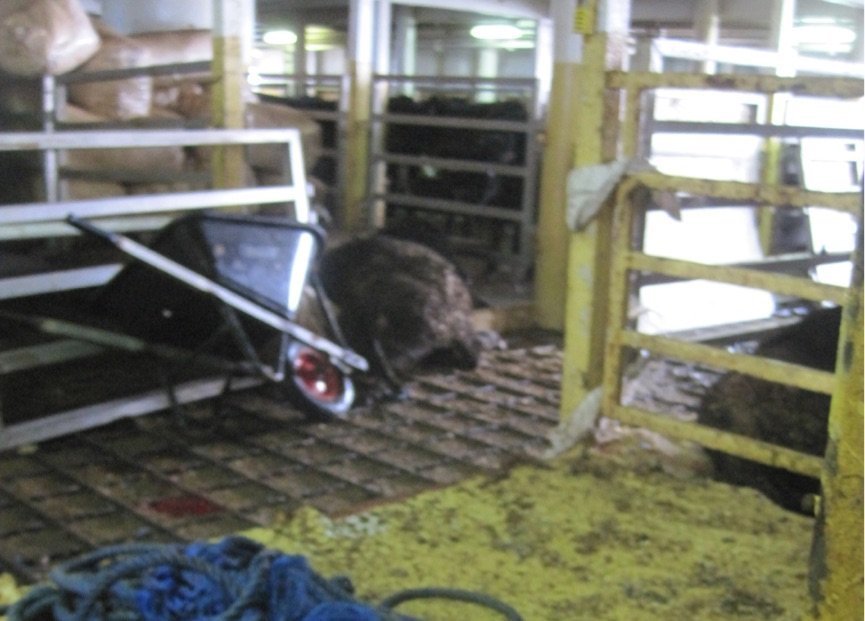 She was in the process of being moved to a hospital pen as she was blind with pinkeye. Pinkeye didn’t directly kill her, the plummet and my gun did. There’s a lucky part to this story, if that’s the right term. On my way up to coffee break I had passed a crewmember sitting on this yellow hatch splicing the rope. He joined me upstairs for afternoon coffee.

Had he not come upstairs at that time he could well have been injured or worse as she landed on the hatch and slid off at great velocity.

The upper deck cargo hatch had not been cordoned off. Even when they were, it was only with rope and a small sign. Livestock don’t read, especially the blind ones. Rope can warn a crewmember to beware, but even so; hatches, stairways, vertical ladders; elevators and vulnerable equipment should not be so easily accessible to anyone or any animal. Precautions should have been implemented.

Immediate injury is the most common risk, however I’ve seen some much larger scale disasters averted. Several times on one vessel I found stray bulls wandering around inside the reverse osmosis plant, and once in an electrical switchboard room.

The reverse osmosis plant makes all the ships fresh drinking water by converting seawater. These bulls had quietly escaped their pens, gone for a wander and decided to step from the non-slip deck flooring into the plant room/s. These rooms have slippery painted steel floors. Very gentle and calm management of these animals to remove them from these areas was used.

If they had slipped or run erratically with stress they could have disabled our water source entirely.

Breaths were held, calm enlisted; losing the water or electricity supply, especially on long haul voyages has the potential to be terminal for the entire cargo. More days at sea equal more risks, and generally more deaths.

In these cases, the unnecessary risk was due to new electricians or deck engineers who were not used to the additional precautions needed when carrying livestock. That was soon rectified. Poor Captain, when I told him his face literally blanched, I suspect nausea ensued.

Contrary to what people think we often have to move animals through human passageways to get to hospital pens, increasingly so as the weeks of a long haul voyage progress. The wrong open door or dangerous access point entered or fallen into by an animal can be disastrous. We improvise to make barriers and to guide animals where we need them to go. We use anything at hand, troughs, bags of chaff, spare gates, wheelbarrows or crewmembers if the animal is safe to stand in front of.

Simple precautions and adaptations in ship design such as more gates and self shutting doors to prevent foreseeable access and subsequent injury for both livestock and crewmembers are something I have been seeking for years.

Some have been implemented; many still to be appreciated by the land based powers that be.