What happens when animals die in transit? Dr Lynn Simpson has the gruesome details.

Unknowingly, at birth, farm animals enter into the ultimate contract. They get a limited life, in exchange for their body parts. They don’t know this of course. They hopefully get to frolic around a picturesque farm, enjoying the sun as a youngster first. This is the advertising image we are shown of our food. So distinct from the slab of steak under cellophane in the supermarket with a bar code and use by date stamped on it.

Some of these frolicking animals will end up on live export ships. Their frolicking finished. The majority destined to an overseas port and slaughterhouse where their body parts will soon be consumed by the customer of a store or restaurant in a foreign country.

A percentage of these animals loaded onto a ship will never touch land again; they will die at sea.

They may break a leg, get an infection from a wound, succumb to a contagious disease missed on inspection pre-loading or simply starve to death from maladaptation to this unnatural environment.

Mechanical failures involving water, fodder, air or propulsion may be their ultimate demise.

Some will die unassisted, their diseases or injuries unnoticed or unresponsive to treatment. They will be discovered upon inspection lying under their pen mates, usually trampled into the sewerage covering the deck. With ‘luck’, most deaths will be at the hands of a reluctant but caring crewmember who recognises the suffering and will not allow it to perpetuate.

At vet school we are taught to kill by drug overdoses. It’s a painless, usually non-distressing process we call euthanasia. Of all the ships I’ve worked on there was only ever one company that would supply me with the euthanasia drug I was trained to use.

The others refused. It’s not a cheap drug, I thought this was the reason.

However, I was shocked to find that it’s considered too dangerous by some shipping companies as it could be misused.

Seafarers, regardless of the cargo they carry, live an adventurous but often dysfunctional lifestyle. It has great sacrifices. Time away from home, family, loved ones. Often poor living conditions and on live export ships, certainly some undesirable living conditions. But many of these crews come from countries where employment options are limited; frighteningly most of the guys I sailed with couldn’t even swim.

As such, I’ve learnt that seafarers of any type of cargo fleet can and do have a high mental health and suicide rate as a result of their work.

Most seafarers couldn’t ‘hit a vein’ to save their lives, so drug availability was really a poorly founded concern, most seafarer suicides, sadly, are believed to have simply stepped off of the back of a ship when no one was watching.

So, I couldn’t get euthanasia solution for most of my voyages as companies were concerned crewmembers would use it to take their own lives. This was an eye opener.

So, as a vet, trained to kill with a simple injection, I quickly had to learn to kill effectively with either a knife or a gun; neither of which I was properly trained to do at vet school.

I was extremely lucky to sail with some very proficient stockmen, who in short order taught me to become efficiently lethal with a knife and gun provided, but not always accessible, and how to maintain both.

Any animal in extreme distress/pain or that I thought had a terminal condition would be euthanised. I’ve had conversations with human doctors who tell me how they wish they could legally put their terminally ill patients out of their misery. It’s a sad task, but a gift of kindness in my view.

The main reason I knocked back a place in medical school.

Dead animals need to be disposed of quickly; this is often a messy task. Sheep are usually thrown whole. If the cause of death is unknown they will be post mortemed first as shown below. 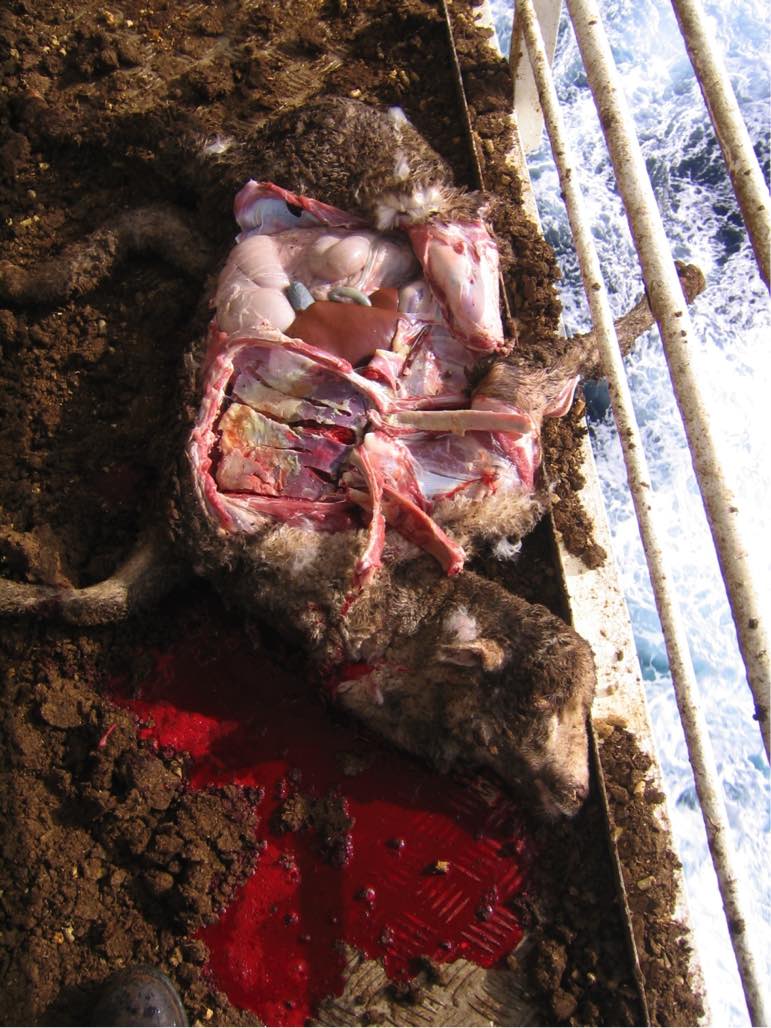 Cattle are a bigger challenge by their sheer size. The average beast needs to be cut into about nine pieces unless they die by the side rail and then we can throw them whole. We use knives and axes, its gross and messy. The pieces need to be dragged from lower decks or from inner pens to enable throwing them to the sea. This is simply gross. But it’s part of the job.

Some ships have machines designed to grind up entire bodies and spit out the dead body soup into the water below the ship. These grinding machines are disgusting, they stink, and are difficult to clean. They mean you often drag bodies further than necessary so add work to already fatigued crew. They are like a laundry chute in old hotels and as you deposit a body or body part in you must make sure you’re not hit by another going past from an upper deck.

Worst of all they are a physical and health hazard for the crew to clean on the return trip. Not to mention depressing and demoralising. Body parts get hooked up on protrusions like bolt heads, ram horns jamb mechanisms, and rotting body parts stick to the inside of the chute.

I’d prefer to cut up the body and throw it directly to the sea. 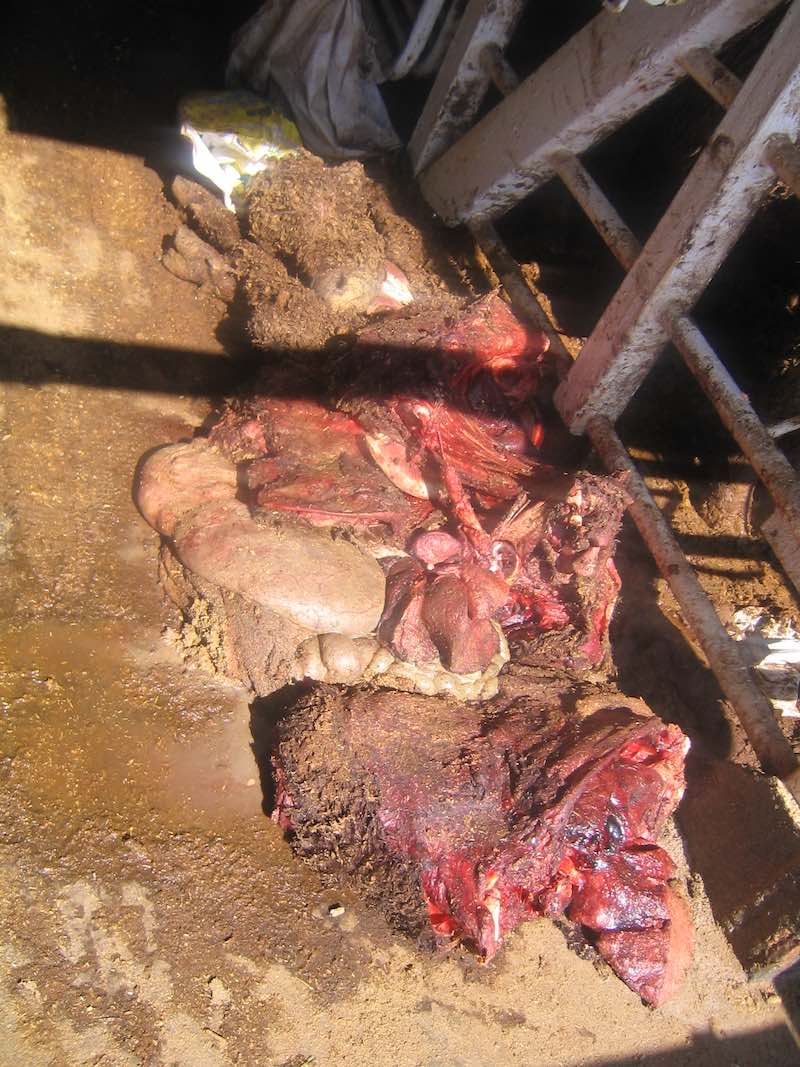 Imagine being trained to save lives. Instead, you’re presented with the reality of the image above and being asked to provide your government an ‘official cause of death’ on that? Look closely if you dare. That’s an entire bull awaiting our passage out of the Suez Canal for disposal into the Mediterranean Sea. I’ve never liked puzzles, but a lot of jigsaws seemed to be involved in this job.

I recall walking up a steep ramp one day, slipping and smashing my knee on the floor ridging. Once I stopped swearing, I looked for what I had slipped on. A random kidney. Just another body part that had missed the seaside express and was hiding under the cover of ever-present shit. I often found body parts lying around, they had been forgotten or left to inform me there had been a mortality here. 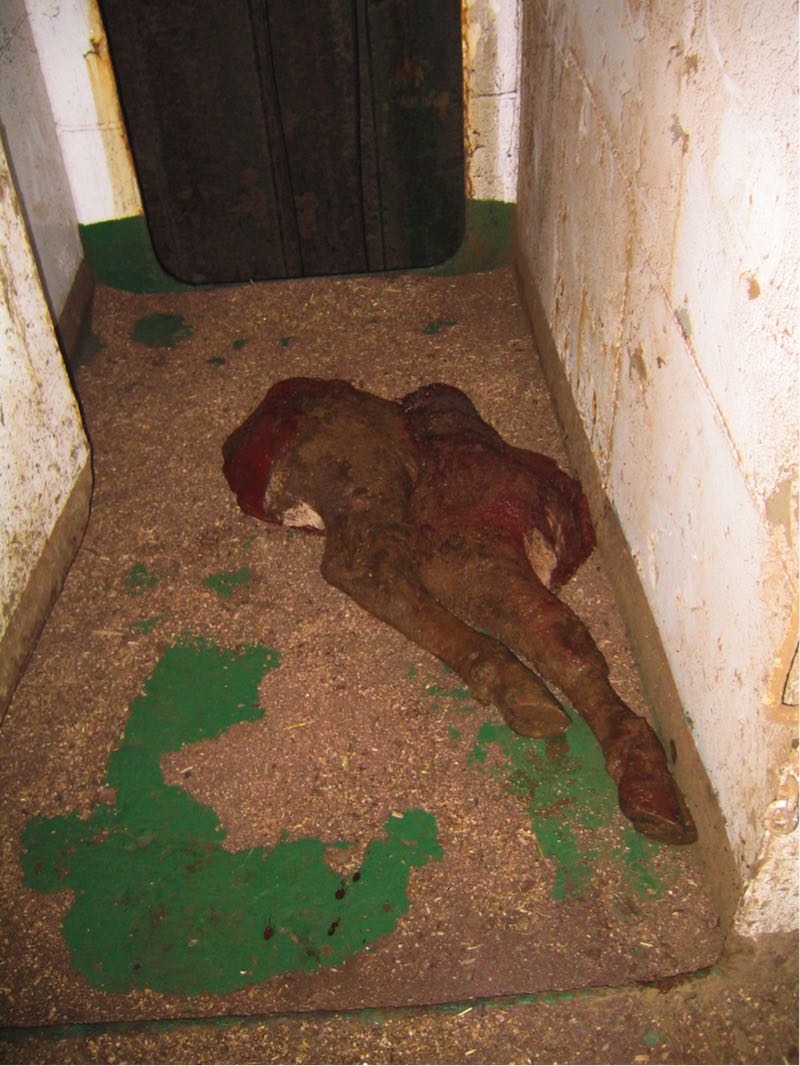 Now, there are enough people that think anyone working on one of these ships regardless of rank is a callous bastard. I’ve read the comments; all feedback is welcomed, it helps me fill the knowledge gaps and educate the world about this industry shrouded in secrecy. Keep asking questions. I’m still asking them myself! 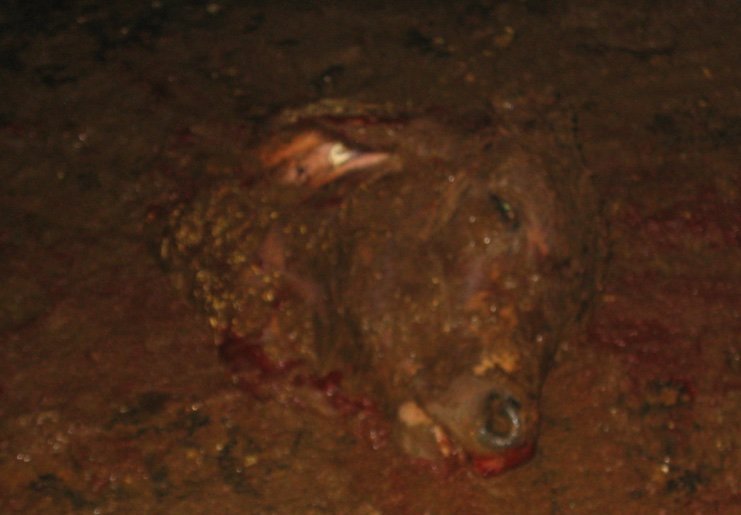 Like, why did someone think I could determine the cause of death by leaving me two back legs and a head to post mortem?