“Shipping fever” is the well known and vet school taught term for infectious bronchopneumonia in cattle.

It was originally identified as a respiratory disease that cattle developed after the stressful mixture of transportation by truck, mixing large numbers of cattle from differing origins into feedlots or sale-yards. Add to that, stressful management procedures such as dehorning, weaning, feed changes, crowding, ear tagging/notching, rationed feed, environmental temperature fluctuations and sometimes castration; and you have the perfect conditions for cattle pneumonia to develop and spread.

Live animal export by sea has taken it a further level and added the ship to the disease as well. Now it really is correctly named ‘shipping fever’.

It’s the most common disease encountered on live export cattle ships and as a vet I cannot tell you how many tens of thousands of cattle I have diagnosed with pneumonia at sea, and sadly sometimes in loading ports when inspections have been substandard.

Tens if not hundreds of thousands of cattle have been treated with antibiotics and anti-inflammatory drugs as the regular shipboard treatment response to help ease pneumonia disease in cattle at sea. This disease and all its variants have the crew on their toes and we spend most of our days looking for and treating it. More public health risks for any human consuming meat from live exported animals. I wouldn’t let it near my plate, Id rather go without a meal.

Unfortunately the crew and I have spent a lot of time doing post mortem examinations and cutting up dead cattle into pieces, lightweight enough to carry up to main deck or to the nearest open edge and throw them to the sea.

Most cattle need to be cut into about 9 pieces. Its messy, depressing and morale destroying for all crew members.

Pneumonia, or bovine respiratory disease, depending on the study you read, is the biggest cause of death for cattle during transportation by sea. The number that would be bigger would be the number of pneumonia morbidities. Morbidities are the animals that are sick, but not dead from a disease.

The morbidity numbers are not calculated or recorded; neither are the numbers of deaths after unloading into importing countries. Hence we don’t know the true mortality rate of live export, only the voyage days.

Ships do not give cattle infectious pneumonia, but they perpetuate the perfect environment to allow it to continue to spread. A crowded, noisy and stressful unnatural environment for the cattle with forced ventilation helping to spread the disease across decks.

This environment stresses cattle and they can begin to succumb to the disease, they get respiratory signs, increased breathing rates, coughing, snotty noses. These animals are simply miserable and obviously feel like shit! The header image is of a severe, near dead pneumonia case that was struck down quickly. Don’t be confused by the picture, he’s a little white Charolaise bull. He’s very sick and covered in dry shit from the voyage.  But he survived, and was likely eaten somewhere. 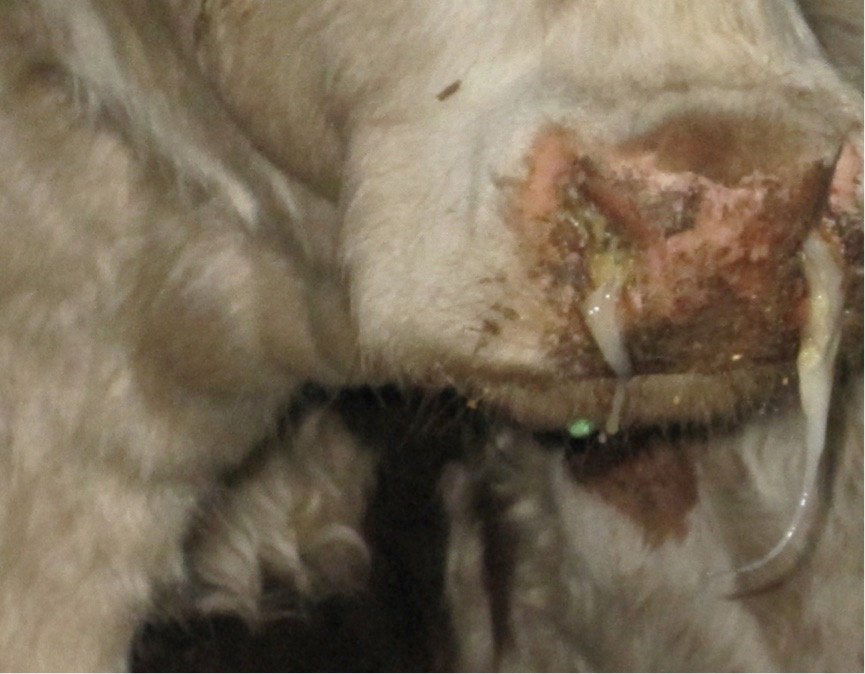 Animals are designed to eat off of ground level, therefore when they get a respiratory infection gravity and physics helps rid the body of pus and pathogen carrying mucus…  eating from raised troughs doesn’t help the physics of this. Infection just gets coughed, dribbled and smeared into troughs and generously spread for the next animal to inadvertently eat or drink.

I won’t show you too many post mortem photos. Some of you might be eating and they are usually gross. 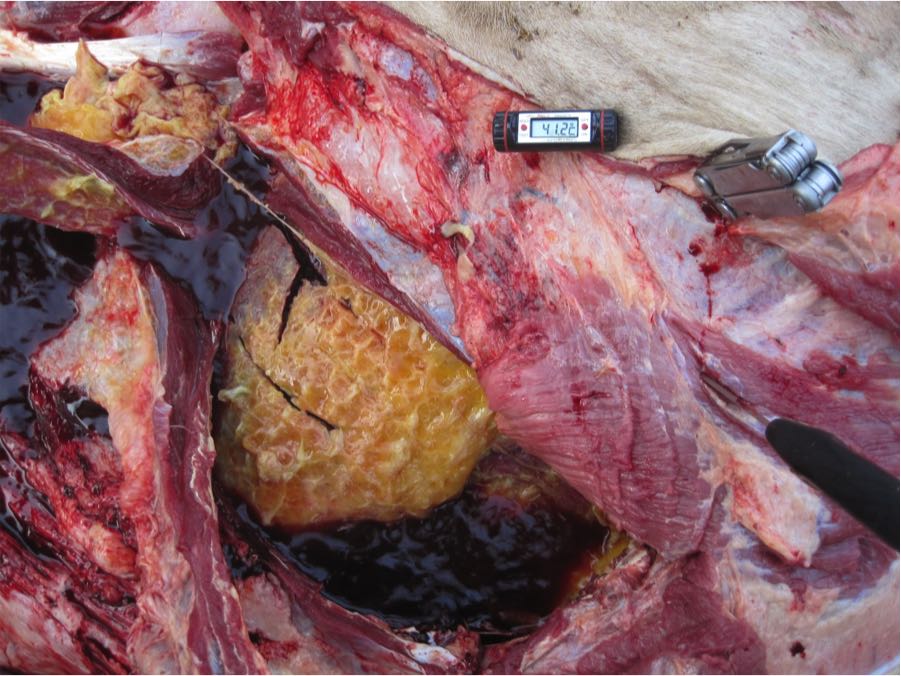 The yellow jelly in this image is a dead bulls lung, it should be candyfloss pink, fluffy, air filled, soft and spongy with no congealed bloody exudate and the body temperature should be around 38 degrees celsius. Clearly this is not the case. This is shipping fever, BRD, pneumonia, whatever you want to call it; from the inside.

As a shipboard vet I spent many an extended wait in airports all over the world. Usually exhausted after a voyage and bored stupid. But no matter where you go there is always some creepy guy wanting to “spend time with you” if your by yourself, so every time I could sense the encroaching fool/s, I would put my computer on and pretend to be studying these types of images.

I was never hassled after I sat eating whilst intently and calmly studying such gross images.

So, I guess they were handy for me in two ways.

One: There is a large range of weapons in this world to be used to protect yourself; guns, knives, hand to hand combat, brains, wit and post mortem close-up photos of organs cut up with pus, blood and decomposing jelly oozing out of them. Who would have thought?

Two: These photos are evidence and reinforcement as to why feedlots and ships need to carry medication onboard and why proper vaccination protocols should be undertaken pre shipping. I emphasize the word “proper” vaccination protocols, as I’ve had unnecessarily terrible voyages with exceedingly high pneumonia deaths.

Infuriatingly only to find out the onshore vets (who did the inspections) and the vaccinations, and never had to sail had only given the cattle on board 1/4 of the pneumonia vaccine recommended by the manufacturer.

When I was told by a crew member that this was the case on one voyage in the middle of the Indian Ocean I was enraged.

I stormed up to the bridge, sent an immediate email to the exporter, and I was put into communication with the vet responsible. To my utter disbelief he admitted to the 1/4 vaccination dose.

Apparently “the cattle were too sick to cope with a vaccine” in the feedlot before sailing!

My response was “ if they were too sick to cope with a vaccine, WTF made you think they could cope with an extra long voyage in the belly of a ship to the other side of the world?

Conversation was terminated quickly; I had sick, dead and dying cattle to deal with, I’d deal with him later.

Upon return to Australia, I put in my report. I contacted the vaccine manufacturer to ensure the massive death rate we had was likely due to the animals all sailing unprotected against a foreseeable risk. The drug company confirmed that a 1/4 dose was useless to the cattle and likely why we had so much death and illness. I also did as legislation deems is my job, and I reported these individuals to the Department of Agriculture, the regulator. I gave them the details, vet names, voyage number etc etc. To the best of my knowledge not so much as a phone call was made to them. Yet in my opinion they should have lost their license to practice veterinary medicine.

The exporter must have given them a kick up the butt, as the following voyage was much improved and these grubs wouldn’t even look me in the eye next time I had the misfortune to cross paths with them.

Why make a difficult job harder?