The TT Club and McKinsey have recently issued an 80-page report looking at how the container business might develop through to 2043. Peregrine Storrs-Fox, TT Club’s risk management director, ponders whether we might be approaching peak container.

In the context of the qualitative research carried out by TT Club and McKinsey & Company, the four projected futures were aimed at a 25-year horizon. Inevitably, because businesses are used to considering much shorter time horizons, key debate around any of the scenarios will be what signposts are available and to what extent could the industry already be journeying in one direction more than another.

Since TT Club is involved with the entire freight supply chain on land, at sea and in the air, the research project sought to identify the opinions of a broad spectrum of senior leaders across the entire industry, interviewing the club board of directors, as well as a number of disruptors and other stakeholders.

In formulating the four ‘bookend’ possible futures, the research revealed an almost-religious debate among the participants about the real fulcrum on which the industry’s long term future rests. On one hand, many focused on trade growth and whether it is possible that the industry will enjoy another boom like the two decades leading to 2008, or, at the other end of the spectrum, whether robotics, 3D printing, near-shoring and geopolitical pressures could cause a structural slowdown in trade growth. On the other, with equal passion, were those who argued that digital, data and analytics are the key game-changers, from which new ways to satisfy customer needs will deliver value.

Watching each developing cloud or being sensitised to another ‘bump in the road’, the temptation for many stakeholders in the containerised industry to tend to pessimism about the future. Recent months have certainly given some credence to the potential dislocation and resentment that feed populist and nationalist political machinations, engorging the imposition of tariffs, not to mention sanctions.

While such geopolitical tensions are indeed pressing, it is worth recognising – particularly with a long view – that there are many twists and turns in international politics on a very regular basis. What is prevalent today is quite different to last year or a decade ago; only a doomsayer would deliberately plot an irretrievable trend line.

In terms of pure containerised trade, while the share of dry seaborne trade has considerably slowed since the early 2000s, it has held at just shy of a quarter and is unlikely to reverse. Even though there may be certain headwinds in global trade, that involving already highly-containerised goods appear to be growing more strongly than other goods. The battle lines seem quite defined for automobiles between differing methods of carriage, but this is probably most strongly influenced by specific trade lanes. However, there remain sectors such as agricultural where the intermodal unit can play an attractive and strong hand.

The ‘peak container’ concept (see image below) is drawn from oil and gas, where many today debate whether or when demand for fossil fuel will crest and wane. Given the differing dynamics in play at this time, it is almost certainly premature to be reading signposts that lead over the next quarter century to such a pessimistic trade future. Furthermore, the unanimous view from industry seniors is that the future is digital. There is much excitement and energy in the industry at present devoted towards a digital revolution. While the long-term prize for digital is inevitably underpinned to some extent by strong international trade, the opportunity to unlock efficiencies in the supply chain is substantial.

It is impossible to know how different trends, uncertainties and discontinuities will combine together over the next 25 years. This new publication seeks to engage all stakeholders in a debate that may shape the next generation. 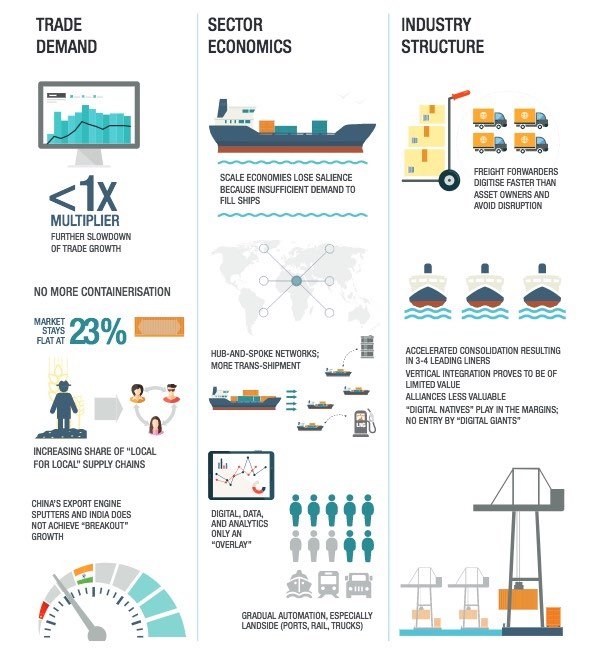 Weekly Broker: Waiting for a pick up

Should Australia be worried by Beijing’s iron ore security posturing?

Weekly Broker: Waiting for a pick up

Should Australia be worried by Beijing’s iron ore security posturing?