Greg Atkinson has been in dialogue with the IMO and the backers of the Poseidon Principles among others as he tries to fathom out what decarbonisation actually means when it comes to shipping.

During the course of the last decade or so, the shipping sector has been subjected to increased scrutiny & regulation related to its impact on the environment, with harmful airborne emissions being of particular concern. Since the Paris Agreement though, the focus has moved to some extent onto two long term objectives: zero emission ships and decarbonisation. These are noble ambitions, but is there a common understanding of what both terms mean and are we all moving towards the same objectives?

Advice often given to project managers is for them to ensure that their project objectives are SMART: this being an acronym for Specific, Measurable, Achievable, Realistic (or Relevant) and Time-bound. But in order to do this the aims of the project need to be clear and the deliverables well defined. So since shipping is aiming for zero (or low) emission vessels and is on a pathway to decarbonisation, then both of these specific terms should be clearly defined. Otherwise it’s going to be very difficult to implement projects that incorporate SMART objectives as will be required to meet these ambitious aspirations.

At this point some readers may let out a deep sigh and think to themselves that they know what zero emissions and decarbonisation mean and so does everyone else. However I have not heard consistent and clear descriptions of either term at meetings, conferences or seminars, nor have I been able to find consistent descriptions of these terms online or in published papers.

For example what exactly is a zero emissions ship? Some would say it’s a vessel on-board which, propulsive power is provided by a solution that emits zero airborne emissions. But what about shore-based emissions? Could a zero emissions ship using electrical propulsion and batteries still be considered “zero emissions” if the batteries are re-charged from electricity generated by a coal-fired power plant? If the ship uses alternative fuels (including biofuels) are land-based emissions that result from the production of these fuels taken into account? Can a ship be deemed to be zero emissions if CO2 emissions are offset by planting trees or via carbon sequestration? Yes? No? Maybe?

To complicate things further the term “net zero emissions” is frequently used and I’ve also seen a classification society use the expression “near net zero emissions”. This last term is so wonderfully ambiguous that it reads as though it has been lifted from Joseph Heller’s classic novel: Catch-22.

Even the term “emissions” can mean different things. Does it mean all airborne emissions including for example lead emissions, or Greenhouse Gas (GHG) emissions, or just CO2? What about discharges into the ocean? Are they not a concern?

Regarding decarbonisation this is defined in many different ways ranging from simply meaning the reduction of CO2 emissions to vague statements about removing carbon from economies and societies. Therefore to gain some understanding of how people view decarbonisation I prepared a single question survey and distributed it via social media. The first four available responses were taken from the websites of a university, a major automaker, a research paper & a safety & standards board. The last three available responses were definitions I proposed. The results of this survey are shown in the chart below. 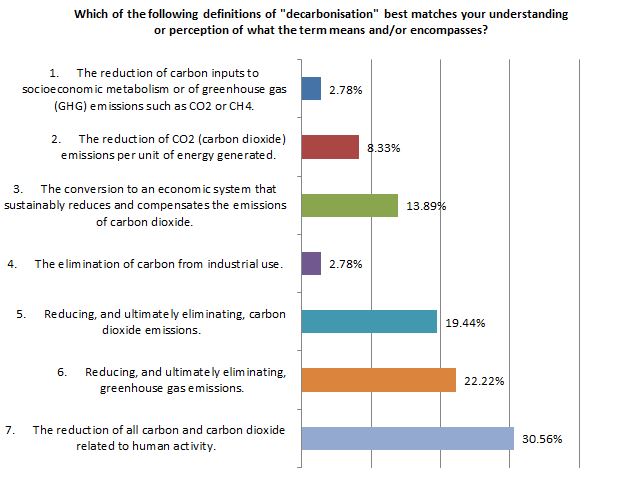 Two observations can be derived from this simple survey. The first is that there does not appear to be a common perception regarding what decarbonisation means. The second observation is that the majority of respondents (around 72%) thought my flawed or vague definitions best matched their understanding or perception of the term. But then again, what does decarbonisation actually mean?

The International Maritime Organization (IMO) does not have its own formal definition for decarbonisation but has adopted a greenhouse gas (GHG) reduction strategy. This strategy has three levels of ambition and these are summarized as follows:

1) Carbon intensity of ships to decline through implementation of further phases of the energy efficiency design index (EEDI) for new ships.

3) To peak GHG emissions from international shipping as soon as possible and to reduce the total annual GHG emissions by at least 50% by 2050 compared to 2008, whilst pursuing efforts towards phasing them out consistent with the Paris Agreement temperature goals.

With respect to decarbonisation, IMO spokesperson Natasha Brown stated that from their perspective that this: “implies development and up-take of zero-carbon technologies and fuels, for which IMO provides the appropriate international platform.”

In addition according to an announcement published on the IMO website: “The IMO Intersessional Working Group on Reduction of GHG Emissions from ships has made significant progress in pushing forward with work to help achieve the ambitious targets set out in the initial IMO strategy on reduction of GHG emissions from ships, which aims, as a matter of urgency, to decarbonise international shipping in this century.”

Thus we can speculate that the IMO may facilitate some discussions regarding regulations specifically aimed at achieving decarbonisation targets. But will all parties in those discussions have the same understanding of what the term means?

Some financial institutions have also banded together and developed guidelines for shipping via the Poseidon Principles. The first of these principles is related to carbon intensity and according to a spokesperson for the Poseidon Principles Association:
“The carbon intensity is calculated by comparing the carbon emissions from a ship to a trajectory. This trajectory builds on the IMO’s initial greenhouse gas strategy to reduce emissions from international shipping by at least 50% by 2050 compared to 2008 levels, and to reduce the CO2 emissions per transport work by at least 40% by 2030, and pursuing a 70% reduction by 2050. The Principles currently only report alignment based on CO2 emissions.”

It’s good to see the banks getting involved but why only focus on carbon intensity and CO2? Furthermore how about also including a principle regarding the treatment of seafarers?

Meanwhile the European Union (EU) is rolling out The European Green Deal which outlines a new growth strategy where:

• There are no net emissions of greenhouse gases by 2050.
• Economic growth is decoupled from resource use.
• No person and no place is left behind.

It is stated that this strategy incorporates a roadmap with actions, although at this stage it appears to be more like an action plan to develop a roadmap. The EU strategy also incorporates terms including: “climate-neutral society”, “full decarbonisation” and “low carbon Europe”.

Since the EU either directly or indirectly has influence over shipping regulations then this will add another layer of complexity to the regulatory framework. Maritime nations outside the EU may also implement their own policies and we can only hope all these policy bodies will somehow be coordinated.

At this time my view is that there does not appear to be common definitions covering zero emissions & decarbonisation, nor is there a common understanding of what these terms mean. I accept though that I may be criticized for being pedantic. My counter argument would simply be: how can targets be set for reducing emissions & achieving decarbonisation when these terms are not clearly defined?

Conceivably some might contend that the term decarbonisation is defined and that in any case, worrying about such details is not important as long as shipping is heading towards reducing emissions. I accept that preposition up to a point, but would also stress that generally speaking projects that have vague objectives have a high risk of running over budget and not delivering good results. Also if clear and specific targets are not set then how are the results of these projects going to be assessed?

This article though is not intended to be critical of any organization, company or association. Rather the intention is to stimulate discussion so that perhaps strategies are improved and linked to clear and well defined objectives. This I believe will help avoid costly mistakes and also prevent poor policy decisions being made, as these might lead to unintended consequences that in turn may result in damage to environments & economies in ways that have not been considered.